“I fell into it. I didn’t think I was going to work for myself,” said Phillips who earned an environmental studies degree in college. Unbeknownst to him his career was set in motion the day he took a job at a greenhouse the summer after graduating. But he took to the work and in 1990 decided to go into business for himself. END_OF_DOCUMENT_TOKEN_TO_BE_REPLACED

The day’s program will focus on the economic opportunities as well as the environmental and societal benefits of embracing, developing, and investing in sustainable farms, practices, technologies, and start-up companies. END_OF_DOCUMENT_TOKEN_TO_BE_REPLACED 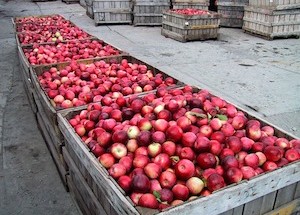 When Bill Suhr started Champlain Orchards in 1998, he knew nothing about growing fruit. At 25-years-old, with a few years experience as an environmental consultant, he decided he wanted to farm the land. Unsure of what kind of farm he was looking for, he rented a room from a woman named in the Lake Champlain area and started touring properties. His landlord suggested that he might enjoy running an orchard, a prediction Suhr says turned out to be “spot on.” END_OF_DOCUMENT_TOKEN_TO_BE_REPLACED

News Release – A 12-year study published in the July-September 2012 issue of the University of California’s California Agriculture journal demonstrates that cotton grown in rotation with tomatoes — using lower-impact conservation tillage — can achieve yields similar to standard cultivation methods and at lower cost.

Conservation tillage seeks to reduce the number of times that tractors cross the field, in order to protect the soil from erosion and compaction, and save time, fuel and labor costs. Cotton crops are planted directly into stubble from the previous crop in the rotation. END_OF_DOCUMENT_TOKEN_TO_BE_REPLACED

News Release – WASHINGTON, DC – A new report released by Field to Market, the Keystone Alliance for Sustainable Agriculture, demonstrates how six commodity crops (corn, wheat, soybeans, cotton, rice and potatoes) are being produced more efficiently in the US than they were thirty years ago, accompanied by important improvements in farm safety and economic sustainability for producers. At the same time, increased production to meet growing demand has also resulted in greater overall resource use by many crops. END_OF_DOCUMENT_TOKEN_TO_BE_REPLACED