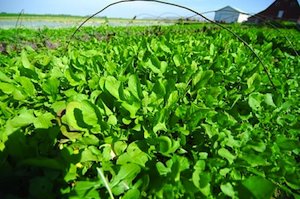 Jon Cherniss has been tending this land since 1997, finding ways of increasing profitability and longevity while maintaining a commitment to organic farming methods, which are often eschewed in favor of short-term gains in Central Illinois. END_OF_DOCUMENT_TOKEN_TO_BE_REPLACED

While interest in local and organic food was once dismissed as a passing trend, it seems that consumer demand is only steadily increasing, to the point where demand for organic food is now growing faster than the domestic supply. Luckily, we are also seeing a burgeoning movement for sustainable agriculture, including in urban areas where local access to such foods can be scarce. Clear Creek Organics, a first generation urban farm located in Wheat Ridge, Colorado, is one example of this growing movement. Stephen and Lauren Cochenour began Clear Creek Organics out of a desire to provide local and organic food for their surrounding community.

Neither Stephen nor Lauren come from farming backgrounds. When asked about what initially sparked his interest in farming, Stephen laughed, saying, “It’s a bit ironic, as I grew up in Wisconsin and it wasn’t until I moved to Colorado that I realized I wanted to grow food for people. END_OF_DOCUMENT_TOKEN_TO_BE_REPLACED