EXCERPT: The Alliance for Sustainable Agriculture today announced goals that its member companies — including General Mills, Kellogg’s, Unilever, Procter & Gamble, Coca-Cola, PepsiCo and Cargill — have committed to in an effort to advance sustainable agriculture in the US.

Walmart Commits to More Sustainable Food. Is it Serious?

Excerpt: On Monday, Walmart held its second semi-annual Global Sustainability Milestone Meeting — webcast live and re-aired the following day — and announced a new pledge to help create a more sustainable food system. Taken at face value, the country’s largest food retailer appears to be making a real commitment to help develop a healthier, more affordable, and less environmentally damaging food supply.  Walmart’s real legacy in this area, though, will be measured by how much concrete action follows its ambitious commitments.

In urban farming, a different taste of L.A.

Excerpt: The tour was organized by Seedstock, a Los Angeles-based company that offers consulting services and disseminates information about sustainable food projects. It hosts an annual conference on sustainable agriculture, which begins Wednesday at the UCLA Anderson School of Management. This year’s theme is “Reintegrating Agriculture: Local Food Systems and the Future of Cities.” 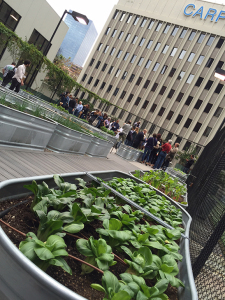 First stop: The rooftop of the Jonathan Club, where the venerable old private social club has installed a rooftop farm in partnership with Farmscape to supply its restaurant. Visitors were treated to a variety of pastries and fruit drinks derived from ingredients grown right on the rooftop. END_OF_DOCUMENT_TOKEN_TO_BE_REPLACED

What the Doctor Ordered: Urban Farming

Excerpt: At a dead-end street in a blighted section of this city, crumbling roofs of old factories, smokestacks and the Interstate 95 overpass loom overhead, casting long shadows on an October afternoon. Along one end of a field, children play soccer; on the other, men stand around motorcycles, sipping from beer cans.

This is hardly the city’s garden spot. Yet alongside the street, on a quarter-acre of land tucked between a muddy parking lot and the Quinnipiac River, a garden does grow; a lush, well-tended vegetable garden, where, on a recent Tuesday, about 35 people, most of them local residents, were busily harvesting carrots and kale that they helped raise.