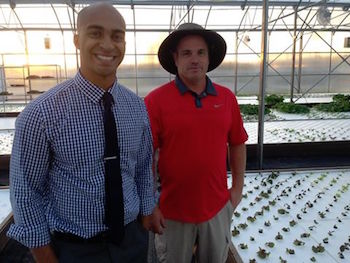 That led three years ago to the formation of Merchant’s Garden, an urban farming enterprise whose mission, according to the company website, is to “make fresh food accessible and affordable to everyone using the science of aquaponics and hydroponics.” The farm was started with the help of investors and the business accelerator organization Startup Tucson. It launched just as Shelton was finishing up his MBA. Shelton and his co-founders initially had trouble finding land for their urban farm, but they were eventually approached by the local school district, which had space available in a closed down school about 1½ miles from town.