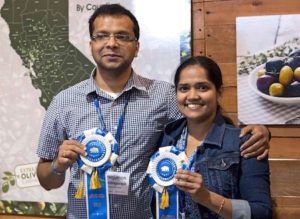 “The application or development of technology applied to agriculture is critical,” says Tse. “There are only two ways to increase food production: increase acreage or increase yield. There is no more exploitable land for farming around the world, so one of the ways we’re going to reach the percentage increase we need is through ag technology that enables us to increase production across the board and reduce waste.”

This concern was the overlying driver that led Tse and other members of an agriculture technology (agtech) roundtable in Sacramento to develop the Apps for Ag Hackathon, a three-day event that brings together people from the technology and agricultural sectors to find solutions to agricultural problems. With these sectors leading California’s economy, the bridging of these two industries seemed like a natural solution.

“Part of our discussion was wondering how we can help agtech further develop within the agriculture industry, and I thought, let’s find a venue where there can be crossover of ideas to nurture that development” Tse says.

During the event, members from the tech sector form teams and pair up with people with an interest and background in agriculture to develop an app that aims to solve an agricultural challenge. Most of the participants are coders with no knowledge of agriculture, and many of the agricultural participants are volunteer farmers who describe a problem they face on their farms. This problem becomes the focus of the app the team will create.

Tse says the solutions can come from anywhere, but the organizers really want to see something totally outside the box.

“I’m absolutely convinced there are lots of people who have solutions for some of our biggest ag challenges, and if we give them the opportunity and set up an environment where these ideas can be brought forth, we’ll have them,” says Tse.

The winners of the first Ag Hackathon in April 2015 perfectly showcased this type of solution. A group of senior computer science majors from UC Santa Barbara were assigned to a farmer with an insect problem. When the farmer would find an insect while inspecting his crops, he had no way to identify it or determine whether it was benign or hazardous, causing him to leave the field in search of answers and having little information to go on.

Tasked with solving this problem, the team created an app based on the popular dating app Tinder. With this app on his phone, the farmer could now snap a picture of the insect and record its GPS location through the smartphone. A compilation of insect photos known to exist in the region would pop up, and the farmer could swipe through them until he found the one that matched his photo. Once the farmer clicked on the correct insect, information about the name of the insect, its harm level, and the appropriate protocols to get rid of it if necessary was provided.

“Nobody in the ag world would ever think about using Tinder as a basis for solving an agricultural problem. I’m almost positive the farmer had never heard of Tinder,” says Tse.

Most of the participants are found through promotional efforts in various fields of technology. For instance, an organization based in the Bay Area responsible for maintaining the Internet became interested and promoted the event on their website, blog, and network. Likewise, a law firm in Silicon Valley specializing in venture capital became interested and not only helped promote the event in their network, but also became a sponsor, offering free legal services to the winner.

Along with this award, winners receive $10,000, tickets to the UC Davis Food and Ag Entrepreneurship Academy, $3,000 worth of Google Cloud Platform credits, and other resources, such as six months to a year of free space at an agtech incubator in Sacramento to help them develop their app.

Approximately seven to eight start-ups have been created as a result of the event, including Giving Garden, an app developed by Deema Tamimi and the winner of the fourth Hackathon. Tamimi’s app is designed to help community members get advice on gardening, data about what and when to grow produce, and information about local food movements in the surrounding areas. The app also allows people to post and share their extra produce.

“The Apps for Ag Hackathon had a big impact on my career as a founder in the agtech and foodtech spaces. I met two of my other co-founders at the event and gained a lot of confidence both in my community gardening app idea and in my ability to be a founder and CEO,” says Tamimi, who recently launched a beta version of the app in the Davis and Sacramento areas.

Since the first event, the Ag Hackathon has been held four other times, with the most recent one occurring July 28-30, 2017. West Hills Community College Coalinga sponsored the event the first year, but since then, it has found a permanent home at the University of California Agriculture and Natural Resources.

Having a university sponsor is significant, since the event is funded mainly by various private sector partners and most of the work is performed by volunteers. The colleges make up for the remaining bulk of the resources needed, providing space for free. The federal government does not currently provide funding or resources, but this year, the United States Veteran’s Administration provided $10,000 to the support the event and sent a member to participate as a judge. The USDA also made their databases available so the “hackers” could have access to data to support their solutions.

The pitch and judging portion of the event took place at the California State Fair, an advantageous venue, according to Tse, because it is painless way of educating the public about advances in agriculture.

Tse hopes that the innovations in agtech will continue to grow in terms of the sophistication of technologies used toward agriculture solutions. This year’s winner, an app that uses IBM’s Watson technology to run real-time disease diagnostics from a plant photo, already exceeded the kind of growth he thought was possible in the few years since the inaugural event.

“If we can’t find solutions in the natural side of things, tech offers a means to help increase production, shrink the environmental footprint, and help make things more efficient if developed and applied the right way,” says Tse. “If we aren’t farming, we don’t eat.”

The hope is to find a sponsoring school in Southern California to continue helping farmers around the state meet the needs of the ever-growing demands.