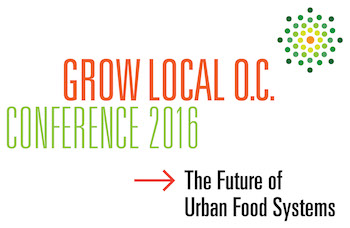 The conference provided ample opportunity for the local food champions, entrepreneurs, and advocates in Orange County to continue to strengthen their base of support to increase food access, improve health outcomes, and meet the demands of a thriving local food marketplace.

Seedstock Founder, Jason Reed kicked off day one of the conference proceedings by noting the huge community and economic development opportunity inherent in fostering and strengthening urban food systems in cities and counties across the country. He outlined a future in which people would see food not only as nourishment, but also as medicine to fuel a healthier society.

Christina Hall, Executive Director of the OC Food Access Coalition echoed his sentiments. She noted that while Orange County is perceived from depictions on television as a center of wealth in Southern California there is a hidden demographic that lives in poverty and suffers from food insecurity. Hall noted that 50% of K-12 children in the county receive free, or reduced price lunches.

The conference’s keynote was delivered by Karen Ross, Secretary of the California Department of Food and Agriculture. Secretary Ross delved into the importance of agriculture and local food systems in cities. She spoke about innovative agricultural systems and of the vital and necessary role that food plays in bridging the rural urban divide. “Food is a connector like no other,” she said. She also highlighted the state’s commitment to help small urban farmers succeed and become a viable component of the food system.

Secretary Ross’s keynote was followed by a panel focused on ‘Connecting Stakeholders to Foster a Robust Local Food System’ in Orange County. The panel was moderated by Dwight Detter of Slow Money SoCal and featured panelists Kimi McAdam of Kaiser Permanente’s Nutrition Services department, Christina Hall of OC Food Access, Mark Lowry, Executive Director of OC Food Bank, and Farmer Glenn Tanaka of Tanaka Farms. The panel explored the common goals that align local stakeholders and enable them to foster a local food system predicated on impactful food policy. McAdam underscored the importance to Kaiser Permanente of sourcing sustainable local food. She noted that the hospital group is looking for solutions to source more local food and said that “we’ve always worked with big distributors, but do we have to?” Mark Lowry of the OC Food Bank noted that to really have an impact local farmers need to produce volume. Farmer Tanaka discussed the importance of agri-tourism and educational programs in helping to bolster the economic viability of his farm. 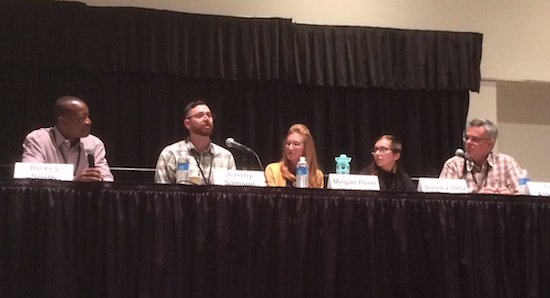 A panel on ‘Community Development and Access to Healthy, Local Food’ followed. The panel, which was moderated by Rickey Smith of Urban Green focused on the value of food system-related community development tools, from farmers’ markets and community and school gardens to larger scale community food initiatives to feed and provide food security to those in need. Featured panelists included Megan Penn of Orange Home Grown, Sonora Ortiz of the Downtown Santa Ana Farmers’ Market, Jeremy Samson of Slow Food Orange County and Cultivate Together, and Tim Alderson of Solutions for Urban Agriculture. The panelists examined the importance of organizing the community to build a stronger food system. “If you are interested in ag, you need to be an activist,” said Slow Food Orange County’s Jeremy Samson. In stressing the community impact of farmers’ markets, Megan Penn of Orange Home Grown noted that “the farmers market feels like church to me. It creates community and a sense of place.” On the value of community farming efforts, Tim Alderson of Solutions for Urban Agriculture noted that “community gardens are valuable when the community values them.”

The urban farming panel was moderated by Dr. Surls and featured panelists Rishi Kumar of The Growing Home, Dr. Aaron Fox of Cal Poly Pomona, Dr. Sara Johnson of California State University, Fullerton, and Anna Maria Desipris of The Ecology Center. The panelists delved into the practical details of urban farming from how one can start a farming project, and the importance of pollinators to obtaining community buy-in, success factors, and accessing land. Dr. Fox of Cal Poly Pomona instructed prospective entrepreneurs considering urban farming ventures to “figure out the why first,” and to know your market. On running a viable urban farm, Kumar exclaimed, “we bought a house on a 1/2 acre lot. The house rent pays for the farm. We have the land for free.”

A discussion of the economic potential of indoor agriculture in cities and how it is strengthening local food systems was moderated by Chris Higgins or Hort Americas and featured panelists Nate Storey of Bright Agrotech, Chef Adam Navidi of Future Foods Farms, Ed Horton of Urban Produce LLC, and Erik Cutter of Alegria Fresh. In acknowledgement of those that question the wisdom and need for indoor farming, Chris Higgins of Hort Americas asked, “why are we the only industry that turns its back on technology?” In response to a question about the food justice implications of indoor farming, Nate Storey of Bright Agrotech countered by that controlled environment agriculture is primarily a commercial opportunity. “It’s not set up to serve outliers,” he said.

The day concluded with a panel focused on finding funding for local food and farming endeavors, which was moderated by Robert Puro of Seedstock. The panel, which looked at funding opportunities available to new and existing farmers and food makers, as well as the obstacles that they face in obtaining this funding, featured panelists Colin and Karen Archipley of Archi’s Acres, Derek Lutz of American AgCredit, Leila Mozaffari of the Orange County Small Business Development Center, and Mary Abad of Slow Money SoCal. Karen Archipley of Archi’s Acres urged small farmers to check out USDA FSA micro loans to help them launch their ventures. Mary Abad of Slow Money SoCal implored entrepreneurs looking for funding to “treat money as one of your most important inputs, and to shop for the best quality.”

Attendees then ended the day over cocktails and flat breads at Oceans & Earth Restaurant in Yorba Linda. 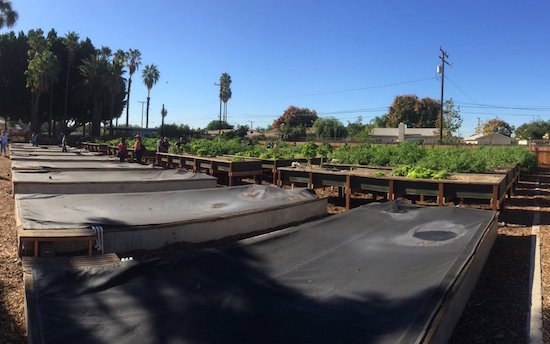 Day two of the conference featured the “Future Farm Field Trip” on which a select group of attendees paid visits to urban and indoor agricultural operations to bear witness to the innovative local food endeavors that are stimulating community and economic development in Orange County. The field trip kicked off with a stop in Anaheim at The Riverbed, an aquaponics community farm that uses minimal water to operate and produces over 2,000 pounds of food for underserved residents. Then it was on to Alegria Fresh in Irvine where attendees ate lunch provided by sponsor Tender Greens, and learned from Erik Cutter about the importance and vitality of soil as well as how urban microfarms can supply communities with locally grown, fresh produce while reducing transportation and preserving natural resources. The tour then moved on to Irvine-based Urban Produce LLC, an indoor vertical farming operation that uses advanced hydroponic technologies in a controlled environment. The day, as well as the conference, concluded at Chef Adam Navidi’s Future Foods Farms, which produces all organically grown products in several 2,000-4,000 square-feet greenhouses, and is one of the largest aquaponic farms in the state.