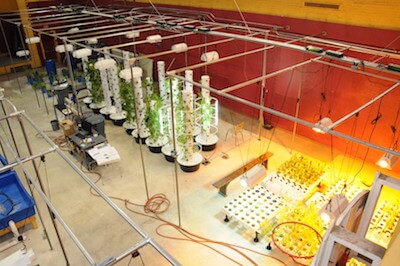 The center known as Harding Street Urban Agriculture Center is run by Duron Chavis, a community advocate and Indoor Farm Director at Virginia State University – College of Agriculture. Seedstock recently spoke to Chavis to learn more about the origin of Harding Street Urban Agriculture Center and its indoor farm, its goal, the sustainable methods employed in the indoor farm’s operation, and more.

Seedstock: Can you tell us a little bit about the origin of the Harding Street Urban Agriculture Center?

Duron Chavis: The Harding Street Urban Agriculture Center was founded under a grant by the USDA NIFA in September 2014. The grant was written by Dr. Marcus Comer of Virginia State University. Awarded in 2013, the project was entitled Building Sustainable Urban Agricultural Systems. The particular focus of the grant was to revitalize a city-owned municipal building for the purpose of local food production and increasing access to healthy food in the city of Petersburg, Virginia.

The building is a former YMCA building. It has always served as a community resource and its present incarnation as an indoor farm speaks to the continued legacy of the building as a hub for meeting the needs of the community. The location was chosen due to its size—it’s approximately 15,000-square-feet. It has a large, open, floor space, classrooms, and a kitchen. And the building’s rigorous pre-WWI construction makes the facility extremely durable—it’s able to support a roof that holds approximately 20,000 kilowatts worth of solar panels that power the indoor farm’s lighting system.

Seedstock: Why is this project unique to the region?

Duron Chavis: The project is an indoor farm in the middle of a city that is primarily a food desert. Like many post-urban renewal cityscapes, the city of Petersburg has suffered from disinvestment. It formerly was home to the warehousing, manufacturing industry. With the death of tobacco in the region, many of those jobs died as well. Later, large employers transitioned out of the area and were never replaced. So, the economics of the city are extremely dire.

The Center is an example of the different types of ways urban agriculture can be used to develop communities. In addition to the indoor farm, we have also developed a microfarm, urban orchard, and urban vineyard on vacant lots in close proximity of the Center (across the street). The collaboration between Social Services, the Health Department, Virginia State University, and the City of Petersburg makes this effort unique. We’re also dedicated to teaching people how to take control of the food system on their own terms.

Seedstock: What type of hydroponic and aquaponic systems does the Center use?

Duron Chavis: We use float bed aquaponics, aeroponic towers, rotating grow chambers, ebb and flow systems, and aeroponic tables. We currently do not use any NFT systems in the facility. The Center is part research, part sustainability, and as such, we are documenting best practices for indoor food production. The different systems in use are all used for research and food production: aeroponics was used primarily for the optimal delivery of nutrients, aquaponics for the purpose of demonstrating a recirculating system, and towers to demonstrate vertical farming.

Seedstock: What other sustainable methods do you employ?

Duron Chavis: We implement rainwater harvesting and solar power. Rainwater is used for the aquaponic system and the vertical grow rack system that is being constructed. The solar power is optimized to power the lighting for food production. We use LEDs to further conserve energy. In phase two of our project, our grow areas will all be climate controlled and enclosed in modular chambers to prohibit issues of pests and fungi, mildew.

Seedstock: What other organizations and programs is the Center involved with?

Duron Chavis: The Center is a project of Virginia State University’s College of Agriculture. It exists as a satellite program of the college, which also doubles as an office of the Virginia Cooperative Extension. Through this, the Center acts as a hub for the local cooperative extension providing community members with immediate access to the diverse offerings of the extension, including technical expertise, resources, and experience as it relates to agriculture, and food and community development.

And the Center works in with the Virginia Department of Health to address health disparities within the region. We quantify the impact of local food production of communities with limited access to health food in addition to developing programs and initiatives to increase the prevalence of healthy produce throughout the region.

The Center partners with Social Services to provide workforce development opportunities for benefit program assistance recipients. This is done through teaching urban farming and culinary arts.

The Center also works with rural and urban farmers throughout the region to procure and aggregate produce that we cannot grow at the indoor farm. In addition, the Center partners with faith-based organizations, specifically local churches that own land that can be converted into urban agriculture demonstration sites.

Seedstock: How do you plan to maintain funding?

Duron Chavis: Part of the Center’s research is the economic feasibility of indoor farming. The Center sells produce directly to consumers and businesses. The goal is for the bulk revenue from sales to maintain the Center on an ongoing basis.

And because the Center works on community development and addresses socio-economic issues in relation to limited food access, it receives grants to fund its mission, too.

As an enterprising nonprofit, the focus of profitability is a concern. The effort to develop a system of production and distribution that will meet the volume and scale needed to sustain a staff beyond a living wage is consistently on our radar. Currently, the Center is funded by the USDA and the funding from an infrastructure standpoint is similar to how a start-up may view an angel investor. The difference is that we view the outcomes and impacts as the return on investment from the USDA, and the research as the deliverables.

Seedstock: Where would you like to see the project in the next 5 years? What is the Center working on?

Duron Chavis: In 5 years, I see the project transforming an at-risk community into a nationally recognized Agrihood with the Center as the hub of innovation, incubating entrepreneurs, and building deeper bridges of collaboration between institutions within the region.

Currently, the Center is working on partnership with other academic institutions within the region to conduct community participation research on race and economic justice using food as a platform for building equity within the disparity that exists within the cities of Petersburg and Richmond, Virginia. I anticipate the development of new growing systems and the open-sourcing of these designs for community members to further democratize innovation in indoor food production.

And more than anything, I see the project being taken over by the community. The community will steer the helm of the Center to further meet the needs of the community in ways they see most fit.