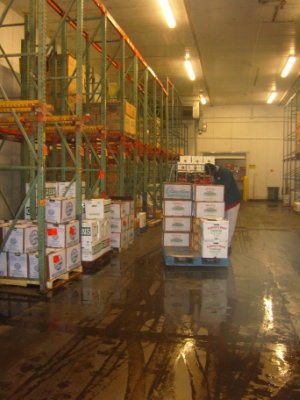 These conclusions were among the results of the 2015 National Food Hub Survey of more than 150 food hubs across the U.S. The report was released on May 12 by the Michigan State University Center for Regional Food Systems. Seedstock recently spoke with the center’s director, Rich Pirog, to learn more about the report’s findings and the future of food hubs.

Seedstock: In the food hub survey, what surprised you, and why?

Rich Pirog: We were surprised to continue to see so many of the food hubs breaking even or better. In an increase from the 2013 survey, 75 percent of the hubs met or beat the break-even mark. There’s a high failure rate for newer businesses in all sectors, and we’re very excited to see so many hubs that were around in 2013 when we did the survey still around in 2015, with the majority of them more viable than before. In other words, their growth in sales is outpacing any increases they have in expense.

Seedstock: How have food hubs been able to achieve this growth in sales?

Rich Pirog: I think there’s several things. There’s still growth in local food markets and so they have to be able to grow their sales. That has been helpful. I would like to think, and certainly the survey does confirm this, that there are various types of state and federal resources for grants and loans. There are also resources such as the National Food Hub Network and also more informal networks, like the Michigan Food Hub Network in Michigan, that are fairly robust.

Hub employees are receiving more high-level training, there’s more information, there’s more grant and loan sources available, networks are enabling food hubs to learn from each other, and I think this increased capacity has contributed to an increase in sales.

Conversely, there were hubs that had more business two years ago when we did the last survey in 2013, but have had issues with marketing or weren’t able to keep enough cash flow.

There’s a saying—if you don’t have enough margin, you can’t follow your mission—I think that’s really true. Hubs need to have enough cash flow to pay bills and show that they’re creditworthy so they can take out loans and grow their business.

Seedstock: What’s the relationship between food hubs and health?

Rich Pirog: Produce is the type of food that the vast majority of food hubs aggregate, broker, and sell. Food hubs that filled out the survey for the report are not selling many prepared or highly-processed items. They’re selling a lot of items that on balance are healthy…produce, meat, milk, eggs—all items that we want to see in a healthy diet. They’re not selling a lot of chocolate-covered eclairs or other foods that are not so healthy. The food they sell is similar to food one might find at a farmers’ market, which is focused on farmers who sell fresh fruits and vegetables.

Food hubs move a lot of produce, and for that reason, I think the health connection is very strong. There are a number of hubs that work in the nonprofit space that have as a mission healthy food access and have been able to, through business operations and grant funding, achieve that mission of enhancing healthy food access, especially to underserved communities.

Seedstock: How can food hubs secure a consistent and adequate supply?

Rich Pirog: The idea of securing more supply is tied to strategies. More than nine out of 10 food hubs surveyed source from small and medium-size farms. The average food hub sources from 80 farmers. What food hubs can do directly is offer more service-oriented programs for farmers—record keeping, food safety, other programs that are aligned with the hub’s mission—that would help existing and beginning growers be, or become more profitable. And so I think a number of hubs have taken that upon themselves as part of their mission to provide various kinds of support to producers.

In addition, there are other foundations and federal and state programs that support food hub development. USDA in particular has really ramped up its focus on not only food hubs but on small and mid-size farmers. There are many programs that are available to those farmers to help them build their capacity—these include beginning farmer grant programs and local food promotion programs.

There are opportunities for hubs to increase their supply by looking at new markets, such as educational institutions. However, more and more, it will take more sophisticated training and expertise among food hub managers. Our survey showed a wide diversity of types of educational levels among food hub managers—they may have a business degree or a degree in arts and theater—but business training is central to food hubs succeeding.

Seedstock: What do food hubs need to do to remain successful into the future?

Rich Pirog: It’s important for food hubs to understand their business model and to understand what they’re very good at. Over time they may need to decrease services that don’t bring in revenue for the business, if necessary. The future will probably show that a hub has to maintain a certain level of sales in order to remain viable. There are estimates from several studies—our survey here does not address that—that show hubs need to have anywhere between $600,000 and $1.5 million in sales to be viable.

Hubs are particularly challenging in rural areas with low population density. A combination of better marketing and management and a better understanding of which services and practices make money will all be helpful to make food hubs successful.