According to the National Resources Defense Council, Americans throw out roughly $165 billion worth of food each year, including 52 percent of all fruits and vegetables. While the majority of this waste is generated by producers and consumers, shipments of food rejected by wholesale produce buyers at grocery stores and other outlets also accounts for literal truckloads of food sent to the landfill because of a couple fuzzy strawberries, an off color, or other slight imperfections in the load.

To save this otherwise edible food from its fate as landfill fodder, a new mobile technology company called Food Cowboy has emerged to divert these rejected food shipments toward those in need. The company has created a smartphone app that connects truckers and other food donors like cafeterias and restaurants with charities who are able to accept the large loads of rejected but perfectly edible food.

“Truckers spend all this time moving food and they don’t want to just dump it,” says co-founder and health and nutrition expert Barbara Cohen.

According to Cohen, dealing with surplus truckloads of food requires more coordination than other food donations. Turned away truckers often look for a food bank, church, or other charity ready and able to handle a large truck loaded with perishable food. But since most charities operate during the day and most food deliveries take place between midnight and 4 a.m., easy solutions are hard to come by.

Food Cowboy gets over this logistic hump by depending on the industry knowledge and expertise of Cohen’s co-founders, Richard Gordon — a trucking industry vet with 25 years experience — and Gordon’s brother Roger, a lawyer and development activist. Collectively, the trio has helped create a matchmaking service that literally puts a solution in the palm of the hand.

The process begins when donors and charities register on the Food Cowboy network via the company’s smartphone app, or the Food Cowboy website. The signup process requires that a charity, or recipient stipulate its loading dock size, cold storage capacity, and other details to help protect donors under federal food donation rules.

When a trucker or other donor has a donation, they enter its relevant information—type, amount, shelf life, type of container, delivery window–into the app. Food Cowboy’s system then sends out a notification email. For local donations, the email goes to the donor’s favored charity. If the donor is a trucker, or otherwise not local, the notification goes to all Food Cowboy network charities located within a 50 mile radius. Depending upon the trucker’s schedule and intended route that radius can extend to 200 miles.

Charities receive the notification email and log it into the system to accept, reject, or forward the donation. 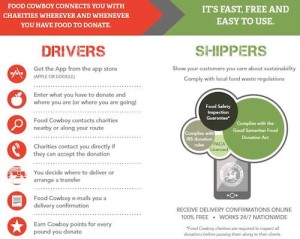 Since its launch in 2013, Cohen says Food Cowboy has helped to save a little more than 1 million pounds of edible food from ending up in landfills each year. She anticipates that this number will increase in the coming year as tax incentives for donation have improved.

In addition to its location-based application to route food that would otherwise go to waste to nearby charities, the company also provides tools for retailers to manage and track their donations and manages a “Limo for Leftovers” service for caterers that charges $1 per guest to collect and redistribute leftover food from weddings or other events.

Running a company that depends primarily on a donated product can be tricky business, but Food Cowboy seems to be solving that problem in their own way as well. When food is donated to charities through Food Cowboy, the donors receive an enhanced deduction as part of their tax benefit. In exchange for facilitating that donation, Food Cowboy receives 15 percent of that enhanced deduction amount. This system benefits everyone, keeping food out of the landfill, feeding the hungry, and providing donors with tax benefits they wouldn’t otherwise receive.

Food Cowboy stretches these earnings even further by directing 95 percent of what it makes into its Food Cowboy Foundation, a non-profit that invests in new technologies and businesses targeting food waste reduction and related environmental policies. Among other initiatives, the foundation provides cash grants to partner food banks so they can improve their operations and cold storage capacity.

“Food banks are not set up to address waste,” Cohen says. “They are set up to feed people.” When a larger food bank increases its storage capacity not only can it take in more food, but it can also store donations for a smaller charity nearby who is unable to accommodate large trucks or deliveries.”

Getting involved with capacity building for food banks is just one way Food Cowboy envisions moving beyond its day to day work of facilitating food donations to make a bigger impact on decreasing overall food waste. According to Cohen, the company is also advocating for solutions like adjusting the tax code to provide tax credits for donors instead of just deductions, as well as increasing the ease of donations, and raising consumer awareness about food waste.

After all, that buyer turning away a truckload of carrots because a few are bent is doing so because he knows that imperfect produce does not sell. As Cohen states, “Americans have gotten used to eating perfect fruit.”

Food Cowboy knows changing that mindset is going to take more than just an app.