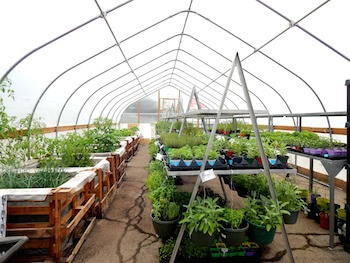 Tidy beds and rows of pots contain what will be the produce delivered to low-income families by Racine, WI-based ‘Growing Home’ CSA program. Photo courtesy of HALO, Inc.

An innovative urban community supported agriculture (CSA) effort is taking root in Racine, Wisconsin to improve access to fresh, locally grown produce. The program, called ‘Growing Home,’ is a grant-funded initiative of Racine’s Homeless Assistance Leadership Organization, Inc. (HALO) whose goal is to deliver produce grown on an urban farm to families residing in a nearby ‘food desert’ where there is little or no access to fresh fruits and vegetables.

Much of the produce for these CSA subscriptions is grown in a 20-by-48-foot hoop house located in a vacant parking lot just South of HALO’s offices. According to Jamie Williams, hoop house manager for HALO, grant money awarded by Sustainable Edible Economic Development, Inc. (SEED) provided the funds to purchase the Growing Home hoop house.

Growing Home was not always an urban CSA program, though. When Williams and her husband started managing the program in 2015, they sold potted culinary herbs at the farmers’ market and used produce grown in the hoop house to make salsa and pickles for resale.

The idea for the urban CSA evolved after Williams decided to plant a few vegetable seeds in the hoop house. She then approached a couple of local families in the area and made the following proposition to them: “if you are willing to purchase anything I grow, I’ll be willing to deliver it to you at no charge.” So, for about a month or so toward the end of the 2015 growing season, she ran “a super informal, mini, practice CSA.” She loved it and realized that this was the direction in which the Growing Home program needed to go.

Growing Home then sought out subscribers and received significant assistance from several local individuals as well as from health insurer, Anthem Blue Cross and Blue Shield, and Grainger, an industrial supplier of equipment and tools. Each bought and gifted shares for the 2016 season with the result that eight Racine families are currently receiving their 2016 weekly produce boxes free of charge.

Currently, the program has 20 subscriber families living within a two-mile radius of its urban farm. For those families not being fully subsidized by the local individuals and corporate supporters noted above, Growing Home CSA subscriptions cost $425 for the full 20-week season (which began in May) and can be paid in full ahead of time or via four monthly payments. In order to make the CSA accessible to the area’s low-income population, HALO reserves 10 of the subscriptions for Supplemental Nutrition Assistance Program (SNAP) recipients. These families use their SNAP benefits to pay upon delivery of the weekly baskets.

As for Growing Home’s future plans, Williams says that the surrounding industrial area has lots of vacant land that could be repurposed to expand the program urban farm footpring. That would take city involvement, which seems unlikely right now according to Williams, but might happen with some pushing and some positive outcomes—like a successful 2016 CSA season.