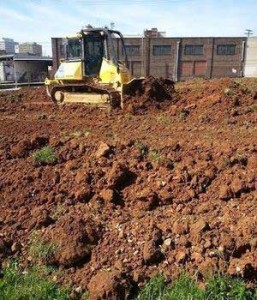 A new Knoxville community garden project is looking to build a new model for urban farm viability by leaning on a triad of private investment, farmers, city government.

Old City Gardens began at the impetus of local business person and state economic development commissioner Randy Boyd, who was eager to see some of the lots he owns in Old City contribute to the area’s green development. He was particularly inspired by Boston’s Fenway Victory Gardens and wanted to find a way to catalyze a similar farm or garden project in Knoxville that could supply local restaurants with fresh produce.

While shopping the idea to a local restaurateur, Boyd was directed to Brenna Wright, owner of Abbey Fields Farm, which has cultivated an urban farm a mile and a half from the Old City site for the past two seasons.

Boyd made his offer: he would donate the land and some startup capital needed to establish necessary infrastructure. In exchange, Abbey Fields would keep the site attractive and organized, while also growing their business through a market garden focused on restaurant sales on one-half of the ¾-acre lot. On the other half, Abbey Fields would manage a community garden with thirty 100 sq ft. garden plots for residents to get involved in growing their own produce.

The opportunity clicked with Abbey Fields’ long-term vision, which Wright says has always included expansion to additional sites around the city to provide more people with good work and healthier public spaces. More importantly, the partnership with Boyd opened a door to a different way of approaching urban farm viability.

“When we started our other site, we didn’t have resources,” Wright says. “We’re familiar with the resourceful, grassroots way of doing it, and that definitely builds resilience and creativity. But at the end of the day, you want it to be desirable, a place people want to live next to, go to, and sometimes when a community garden gets started in a city, it can look inaccessible to people who don’t understand farming. Now I want to farm for a living. We want to do this all the time. So we need to figure out how to make that work.”

Though she admits it’s not something she’s used to, Wright says soliciting the private sector is a strategy urban farmers and developers could mutually benefit from. Seed money is often successful in many other types of businesses; why would the same idea, in the form of cash or property resources, not also be a valid approach in a field where acquiring the field itself is one of the largest obstacles?

Urban farmers taking a more proactive, business-like approach to forming private partnerships may also help sustain support from local governments, she says. Even in Knoxville, where Mayor Madeline Rogero and the city’s sustainability office have been enthusiastic about renovating policy to support urban agriculture, urban farming is still a small part of the job city leaders are responsible for doing. According to Wright, savvy urban farmers can go beyond tugging on the city’s shirttails by offering themselves as a catalyst for productive, healthy urban revitalization.

“The city doesn’t need to take on all of urban blight,” Wright says. “I’m hoping that through this project, developers and people who own some of these spaces might see it’s not going to hurt them financially, in the long run, to put money into some of these spaces as more creative ventures besides condos.”

The project’s business sense was built in from the beginning. Wright says Boyd was happy to provide startup resources, but he was also clear about wanting Old City Gardens to be able to support itself. To this end, the project has made some bold choices, such as a $100 fee for a one season lease on each community garden bed. Compared to fees as low as $20 or $30 in other community gardens in other cities, the fee may seem exorbitant.

But according to Wright, the fee represents an important step forward in the viability of urban farms and the evolution of the way we value food. While many urban farmers may be affectionately known for their passion-over-profit mentality, Wright suggests the status quos of undercharging and being excessively scrappy may not be the most viable path forward.

In addition to going toward infrastructure such as wheelchair accessible beds, a tool shed, fencing, and property taxes, Old City Gardens’ fee also goes toward creating an attractive, safe outdoor amenity in the neighborhood where neighbors and experienced farmers can exchange knowledge and increase access to fresh, local food in the process. All of this for an amount, she points out, that’s less per month than a Netflix subscription.

“I just don’t think we need to be apologetic about our product anymore,” Wright says. “Food is something we pay for wherever we go, so I feel like making this into a formal, serious business can help sustain it because people can say ‘It’s not something I only do in my spare time; I can farm in the city and here’s how.”

So far, the value Old City Gardens is creating has resonated not only with the farmers and the farm’s investor, but with the community. Old City Gardens filled 27 of its 30 available spots within 10 days of its first advertisement, and the farm is busy assembling a list of about a dozen local restaurants who have expressed interest in buying farm product.

Wright credits the early success to the interest of the neighborhood, but also to the benefits of working with business professionals who possess advertising or public relations experience and have social networks in those fields that urban farmers typically do not.

As spring arrives, Wright, Boyd and the rest of the project crew are helping prepare the site for its inaugural season, The official grand opening of Old City Gardens is planned for mid-May or early June.