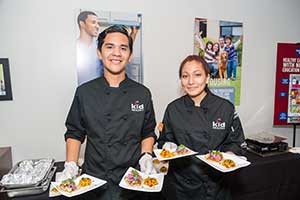 Who better to put in charge of creating healthy school lunch menu options than the students themselves? It might sound crazy to some, but eager high school students in Orange County, California are taking on this challenge by participating in Cooking Up Change, an annual national culinary competition in which teams of student chefs strive to concoct healthy and delicious school meals.

The program is part of the Healthy Schools Campaign and winning high school teams qualify for the national contest in Washington, D.C.

In Orange County, the program is managed by Kid Healthy, an organization that focuses on reducing childhood obesity and promoting healthy diets.

Competing teams in the Orange County Cooking Up Change event, scheduled for April 21, will create a new lunch menu limited to common cafeteria ingredients and a $1.75 (per meal) budget. Judges will evaluate the recipes for creativity, nutrition and taste.

In Orange County the contest is limited to students from Title I high schools, which comprise numerous students in meal-assistance programs from low-income communities. This is important because many students from these largely urban schools have limited knowledge of agriculture and the culinary world.

“A lot of them have not had much exposure as to where their food comes from,” says Linda Franks, executive director of Kid Healthy.

Each year Kid Healthy approaches high schools with culinary programs, or with a focus on food and nutrition. The first 12 schools to sign up are accepted into the county contest. Sometimes this leads to big things—last year’s Orange County winner was Westminster High School, whose student team went on to finish as the runner-up in the national event in Washington D.C.

After a school signs up to be a part of Cooking Up Change, teachers and principals select a student team. The team is then mentored and trained in the lead up to the competition

“Student teams are mentored by head chefs and sous chefs and other culinary professionals,” Franks says. “They work with them for about four months, meeting regularly.”

In Orange County, a number of Cooking Up Change students are mentored and taught by chefs at Provenance, a Newport Beach restaurant that serves local and seasonal food. The restaurant features a 1,300 square foot raised-bed organic garden that supplies much of its fresh greens and produce. Students who learn from Provenance chefs witness firsthand the relationship between agriculture and food and gain appreciation for seasonality and local growing.

One of Cooking Up Change’s most profound impacts is when students realize they can bridge the gap between top-tier restaurants and urban school cafeterias. Drawing on inspiration and education they received from first-class chefs, students come up with their own culinary creations that are later shared with others.

“Recipes are shared with the student population and through the cafeteria,” Franks says. “Also, a cookbook is created with all recipes for that season. This generates interest. Some of these new recipes become part of a school cafeteria’s permanent menu—Franks would like to see this happen more often.

Another impact made on contestants is much more significant than any tasty dish—Franks points to newly gained life skills such as self-confidence and professionalism. Student participants also realize that they have the power to change their schools and their world.

It doesn’t stop there. According to Franks, Cooking Up Change often transforms the lives of participating students by launching them on a career path they might have never imagined. Contestants have the opportunity to receive culinary school scholarships and/or food-related internships; but regardless, Franks hopes that all students who take part in Cooking Up Change continue to utilize their new skills long after they graduate from high school.

“It opens their eyes,” she says. “We love this contest—it’s a great program for us.”