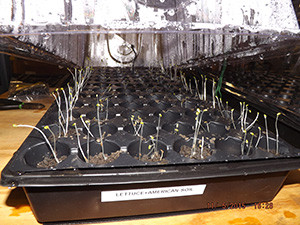 The solution they came up with is hydroponic growing. Not only would this increase efficiency and productivity of Second Harvest Food Bank’s eight-county operation, but would also enable people who benefit from the food bank to enjoy fresh produce during every month of the year.

The students have been honing their hydroponic growing skills in a greenhouse and a downtown Anderson, Indiana warehouse.

Second Harvest Food Bank depends heavily on a variety of sources for food. Tim Kean, Second Harvest president and CEO, is excited about the prospects of sourcing more of its food locally.

“This growing project is on the forefront of what’s going on with food banks,” says Kean. “The idea of vertical growing and producing food inside a building changes the game for food banks.”

Much of the classwork at Purdue Polytechnic requires that students partner with industry or a nonprofit to gain real-world experience and put what they’ve learned to good use. According to Corey Sharp, director of Purdue Polytechnic’s Anderson campus, the relationship with Second Harvest Food Bank grew out of the following questions: “What would we learn if we were going to draw up a hydroponics facility for a food bank? What would it take?”

To this end, students tackled much more than a hydroponics strategy—they’re also addressing the need for warehouse automation, more efficient accessibility with GPS systems, and greater financial sustainability through expanding the food bank’s market to sell excess produce.

Lorri Barnett, who teaches industrial technology classes at Purdue Polytechnic, says her students conducted research on growing vegetables in dark enclosed spaces. With a focus on producing vegetables and greens year-round, they began producing spinach, lettuce and marigolds. Their future goal is to grow spinach and microgreens, in addition to lettuce.

For the project to be financially self-sustaining, Barnett and her students have been working on a storefront food market concept and have identified several chefs at local country clubs who will purchase micro greens from them.

The project is still in its early stages, and Purdue Polytechnic students have not yet grown much to contribute to Second Harvest. But this is set to change soon. Kean has a vision for how the endeavor can evolve to make more room in the food bank’s facility for extensive indoor vertical growing.

But this is set to change soon. Kean has a vision for how the endeavor can evolve to make more room in the food bank’s facility for extensive indoor vertical growing.

Kean has also embraced the idea of a storefront concept, in addition to possible opportunities to sell excess produce at a farmers’ market.

“In five years I would like for us to produce enough food for a consistent supply that will satisfy our need as a food bank, with enough left over to sell,” he says.

One of Barnett’s goals is for her class to write step-by-step manual to help other “newbies” venture into hydroponic growing. She’s happy that interest in the project has exploded, but the road has not been easy and is nowhere near its end.

“I’m not a farmer, and I don’t know what I don’t know,” she says. “I’m a professor who is interested in making mistakes.” But it’s these mistakes, Barnett believes, that will provide opportunities for the students and the area’s needy.

What’s next on the horizon? Aquaponics.