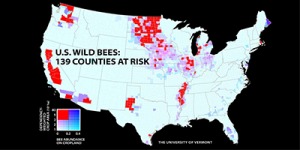 A national study suggests that intensive farming is perhaps the greatest danger to wild bee survival.

Led by University of Vermont scientist Dr. Insu Koh, the research team is the first to compare the species’ population over time with the location of pollinator-dependent crops. The researchers found that between 2008 and 2013, the abundance of wild bees dropped in almost a quarter of the contiguous United States.

The study suggests that conversion of grassland and pasture to row crops is the driving force behind the disappearance of bees–not pesticides, climate change, or disease.

The researchers assembled a map to illustrate the areas most in danger, highlighting where the balance between crops in need of bees and the available bee population is unbalanced. A web app also depicts the data. 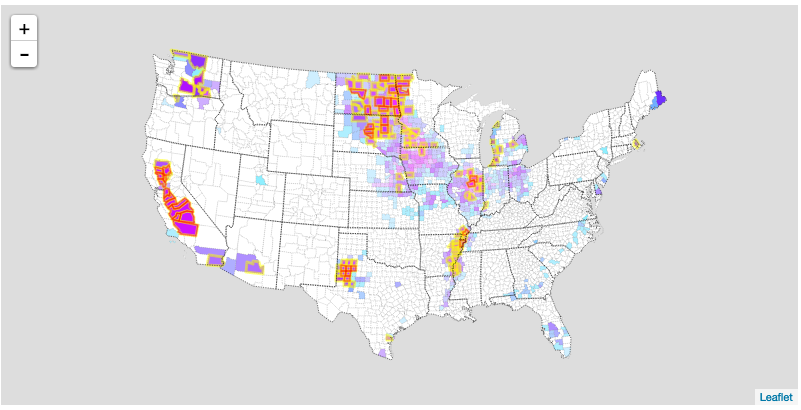 The counties on the map make up 39-percent of pollinator-dependent crop area. Even more concerning, researchers found that “the crops most highly dependent on pollinators tend to experience more severe mismatches between declining supply and increasing demand.”

For example, farmers who grow pumpkins, watermelons, pears, and almonds, are the most susceptible to declines in wild bee abundance.

This revelation, according to Dr. Koh, is the most surprising part of the study. In an interview, he predicts that if the trend continues, “we might lose some nutritious foods such as nuts and fruits. It also may impact our natural ecosystems because 70-percent of flowering plants rely on animal pollinators.”

There are quick solutions to the wild bee decline for farmers; more bees can always be brought in. But as demand increases, so too will rental fees for honey bees, and, in turn, the cost of produce like blueberries and apples for consumers.

Dr. Koh says creating pollinator habitats near farmland can help support bee populations, but the study does not provide any statistics about how much of an impact neighboring areas for bees could have on dropping abundance, or how much habitat would be required to make an impact.

The researchers also uncovered some hopeful news: The decline in abundance of wild bees is not irreversible. They saw abundance increase in areas where crops have reverted back to grassland, such as where the US Department of Agriculture’s Conservation Reserve Program has compensated farmers for allowing farmland to go fallow.

The study does not explore reasons for why bees are declining most heavily in areas where crops are most dependent on pollinators, but only that the phenomenon is occurring. Future research could look into the health of the bees themselves and whether the crops in question use similar pesticides or farming practices not used in areas where wild bee populations are more stable.

Future research avenues, according to Koh, might evaluate the prevalence of disease or pesticides in the areas experiencing wild bee decline, or if any species are replacing the wild bees. The study does not assess whether the correlation is unique to the United States, and does not evaluate what sustainable farming practices might be in use in these areas, or if there are any areas where wild bees are thriving.

Building on these questions, the study is set to serve as a launching point for further investigation into causes of disappearance, and as a way to pinpoint locations to prioritize for examination and potential intervention. If the growth of intensive agricultural areas expands unchecked, Dr. Koh expects the bee shortage to only increase with time.