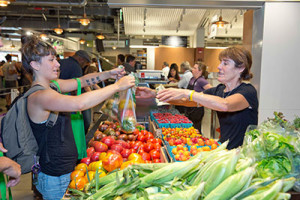 Selling locally-produced foods to Bostonians was the impetus for the market, says Emig.

“This is the way people used to shop in cities,” she says, citing local food markets being the reason for so many “Market Streets” in cities around the United States. “As time went on, we changed the way we behaved. In Boston, we lost the center city market.”

The city’s Quincy Market, otherwise known as Faneuil Hall Marketplace, is robust and features many food offerings. But Boston Public Market is re-introducing the core concept of local to a city steeped in wonderful food traditions.

“The idea came about 20 years ago,” says Emig. “Now the community can access local, fresh and healthy food.”

In addition to its plenitude of local food, Boston Public Market is committed to creating community space and offering educational opportunities about food systems via its kitchen classroom.

The Trustees of Reservations it the largest private farmland owner in Massachusetts, and is committed to educating the public about sustainable food and agriculture.

Boston Public Market is committed to educating about and providing local food, but not to the standard demographic which tends to be drawn toward such places. It also aims to make healthy local food available to lower-income people.

“We don’t just want to cater to a high-income group,” Emig says.

In order to be able to serve customers in the lower-income bracket, the market has adopted multiple strategies. Vendors sell “seconds” or misshapen food and produce. For example, a market pasta seller sells less-than-perfect cuts of pasta, including end cuts. And, the market sells to customers who utilize food assistance programs.

“Our vendors accept EBT and SNAP—this was no small feat,” says Emig.

And through the Boston Bounty Bucks program, lower-income customers are able to double their purchasing power at the market.

Boston Public Market is also committed to soil health, and in the future may sell soil to customers. For now, it works with Boston-based CERO (Cooperative Energy, Recycling & Organics) in composting its food waste.

Emig acknowledges the market’s ambitious scope, and is optimistic that it will serve as a catalyst to get more people to appreciate local foods. She’s also excited to show people that yes, a market can serve locally-produced food year-round, even in cold and snowy Boston in the winter.

“We hope people will learn how to store turnips and rutabagas, to eat more seasonally,” she says.

Technological innovations also enable locally-grown food to be purveyed in all 12 months of the year. Emig says the market is working with growers who utilize hoop houses and hydroponics systems.

Additionally, Emig hopes the market continues to grow and evolve to meet the needs of Boston and its residents, and to continue serving as a center of rich community.

“I hope it encourages people to talk about food, to get their hands dirty,” she says. “Recently at the market I overheard an older woman ask a younger guy what he was going to do with his eggplants. He told her, and she then wrote down a recipe for curry that uses that eggplant. You don’t find that level of sharing in grocery stores, typically.”

The market’s original advocacy organization was the Boston Public Market Association, which later turned into a developer and now an operator. Boston Public Market, a nonprofit organization, was formed thanks to partnerships with the City of Boston, the Commonwealth of Massachusetts, different foundations, and numerous individual and corporate donors.

“It’s been a long time coming,” Emig says. “We’ve had incredible support from so many.”

Hydroponics, Aquaponics and the Future of Local Food at the 4th Annual Seedstock Sustainable Ag Conference