Why Does Hawaii Import Most of Its Food Yet Rank High on Locavore Index? 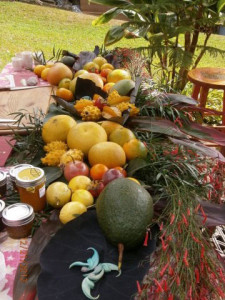 Hawaii is known for its many varieties of delicious fruits and vegetables. (photo courtesy of Nancy Redfeather/The Kohala Center)

Hawaii,  known for its beaches and lavish resorts, has become a hotspot for local food and agriculture in recent years.

Hawaii was No. 8 on the 2015 Locavore Index, a list that ranks every state in its commitment to local foods. The list is compiled by Vermont-based local food advocacy organization Strolling of the Heifers.

“The purpose of the index is to stimulate efforts across the country to use more local food in homes, restaurants, schools and institutions,” says Orly Munzing, founder and executive director of Strolling of the Heifers.

The index takes into account the number of food hubs, farmers’ markets and CSAs, as well as farm-to-school efforts and per capita direct food sales.

Hawaii has a significant and diverse agricultural history, according to Catarina Zaragoza-Dodge, co-owner of The Locavore Store in Hilo. But today, Hawaii imports 90 percent of its food—much of it from the mainland United States.

“Twenty years ago, this was not the case,” Zaragoza-Dodge says. “Hawaii used to have lots of local dairies, wheat, meat and rice. We have the capacity.”

Zaragoza-Dodge points out the fact that cargo vessels ship cattle to the mainland to be finished, and then they are shipped back to Hawaii for consumption.

“We pay a lot extra for groceries,” she says.

“Cost drives things, the market drives things,” says Redfeather. “It’s cheaper to import food from the mainland. Government policies could help remedy the situation, but we don’t have that.”

Redfeather says that even though Hawaii has an ample water supply, a hindrance to local food and agriculture is the high expense of land—$100,000 per acre.

“But farmers need land,” says Redfeather. “If we can figure out the land use piece, we already have sun, water and energy.”

Procuring farm labor is also an obstacle, she says, as field workers are brought in from other countries.

But even though “big agriculture” in Hawaii is by many measures not sustainable, Redfeather feels that Hawaii residents can go around the system by growing their food. She has 65 fruit, nut and spice trees, and 100 coffee trees that grow 12 varieties of coffee.

“Most people can grow food right in their backyards—this is the best way,” she says. “But policymakers don’t get that because it’s outside the economic system.”

Many Hawaiians feel inspired to source their food locally, says Zaragoza-Dodge. That is one reason she and her husband, Arthur Zaragoza-Dodge, founded The Locavore Store in 2010.

“It’s really a small food hub—we just didn’t realize it at the time,” she says. “There was such a big need for it. Our idea evolved; it responded to a neighborhood need.”

Now, The Locavore Store works with 90 farmers and sells a wide variety of products, including grass-fed beef, papayas and eggs.

Zaragoza-Dodge believes that more local foods consumption in Hawaii will also help the state’s economy, which can be fragile because Hawaii is so isolated.

“Grocery stores only have three days’ worth of groceries on their shelves at any time,” she says.

Consequently, if dock workers strike, this leaves Hawaii at risk of not having enough food for its residents.

Many school-age children in Hawaii are taught the importance of local foods, as the Hawaii Farm to School and School Garden Hui has members from school garden networks on the islands of Kauai, Oahu, Molokai, Maui/Lanai and Hawaii.

Every year, farm-to-school experts in the state convene at the School Learning Garden Symposium.

Almost 80 percent of K-12 public schools in Hawaii have school gardens, the vast majority of which are used for instruction purposes, according to the Hawaii Department of Health.

“We want to teach kids how to eat healthily,” says Redfeather. “This will help drive the local economy when these kids grow up.”

The “Buy Local, It Matters” campaign, a joint project of the Hawaii Department of Agriculture, the University of Hawaii College of Tropical Agriculture and the Hawaii Farm Bureau Federation, encourages residents of Hawaii to purchase local produce.

Even though Hawaii only has a population of 1,419,561, it boasts 101 farmers’ markets and 23 CSAs, according to data released by Strolling of the Heifers.