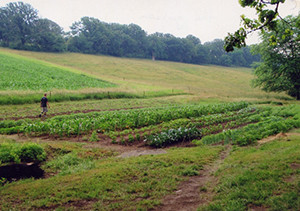 The Sustainable Iowa Land Trust (SILT), which launched this past January, is off to a strong start with the contribution of 53 acres of prime farmland near Omaha. The organization’s mission is to support sustainable farming through land conservation.

To find out more about the organization and its plans, Seedstock spoke with Suzan Erem,  SILT’s president.

Seedstock: When and how was SILT founded?

Suzan Erem: The Sustainable Iowa Land Trust was founded in late January after two years of research at the state and national level searching for a land trust [model] that would protect land in Iowa and guarantee it would grow food (as opposed to fuel or feed as most of our land does now).

Seedstock: You got a boost to your start with Joe Driscoll, a farmer who provided 53 acres of land. How did you find him?

SE: Joe Driscoll called us a week before we went public with SILT. He was about to have to sell 53 acres of his family farm, which he had already surveyed off, to pay off debt incurred while spending decades trying to invent an environmentally-friendly plaster. He had already developed this notion of a Young People’s Farm, but there was no way he’d be able to get nonprofit status and raise the funds he needed in time. We had no money and no staff, but I said that if we could buy him some time, he could at least use our nonprofit status to raise funds.

Seedstock: You’ve said the partnership is a perfect fit. Why is that?

SE: Because this farm is 15 minutes from downtown Omaha, Neb. and Council Bluffs, Iowa — both are great markets for any local food producer. It’s 53 acres (with 31 tillable, and the rest in oak savanna). Also: Acorn-fed pork goes for a premium. Plus, it’s only a mile from the Hitchcock Nature Center — a very popular spot for nature lovers, prairie buffs, and fans of the Loess Hills.

A working farm growing healthy food in an oak savanna will prove educational for the 60,000 visitors who go through that land every year. Joe dreams of the day when kids from the nature center will visit the farm and eat ice cream made from dairy cows they’ll see out in the pasture! The land also is in a prime location for the mission Joe envisions: getting young people out there, learning about their food.

Seedstock: How were finances secured to get this land?

SE: In November 2014, SILT had the good fortune of being able to present to the Slow Money National Gathering. We won second place in their Beetcoin Campaign, where the 800 people in attendance, as well as others online, were able to vote for the best projects. We received a $20,000, no-interest loan for three years, but we received so much more in those three days. People with expertise, experience, and with financial resources handed me their business cards or chatted with me about SILT. Thanks to that one event, we’ve made friends who are financial advisers, wealthy food and farm advocates, nonprofit leaders, and others all over the country. One of those wealthy advocates lives in California and we called her with this proposition: We need to borrow $200,000 to pay off the bank and buy ourselves time. She was willing to loan us that amount at 5 percent the first two years and 6.5 percent the third. The Slow Money twist, if you will, is that we don’t have to pay a dime of it until it comes due, giving us the full three years, if we need them, to raise the funds.

We borrowed that money, paid Joe Driscoll with it, and gave him an IOU for another $130,000 extra he needed for his retirement (he’s 71 and still working, as is his wife). He in turn gave us the deed to the land and made a legal commitment to raising the money. Whatever he raises first goes to our Slow Money investor. Whatever he raises above that up to a total of $330,000 goes to him.

Seedstock: Tell us about how SILT plans to help new farmers.

SE: SILT was created to protect Iowa farmland to grow healthy food in perpetuity. This is a radical notion for a state that imports 90 percent of its food. On land we own (all of which will be donated to us except for this special case with Joe), we will provide long-term inheritable leases to farmers, and they will own the house, barn, and business on the land. This is a model we picked up from Equity Trust (equitytrust.org). So, instead of pouring millions into interest on a mortgage, newer farmers can put their money into their operation early on when it needs it most. We anticipate charging market rate but reducing the rate for more sustainable practices, especially of the soil needs remediation.

Seedstock: How many farmers are you working with to “work the land” in the Trust now?

SE: We only launched in late January, but about a half dozen people have contacted us about farming. They all realize that our first job is to secure the land. But looking for farmers is on the horizon. Our board is starting to work on that issue. For the moment, we hope to tap the rich networks of much more experienced nonprofits such as Practical Farmers of Iowa, MOSES, Land Stewardship Project, and the Center for Rural Affairs. I  think we need to look beyond the Midwest, too.

Seedstock: Where would you like to see your organization in the future?

SE: SILT is changing the way people think about farmland in Iowa. We’re taking the price of farmland and land speculation out of the equation for every generation that comes after this one. I also want to add that this is not just the work of SILT. This is a national knowledge base, developed over 40 years around the nation, finally emerging in Iowa.