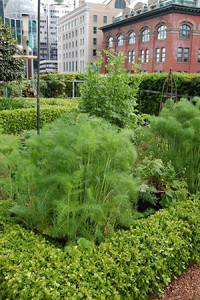 Though this growth is encouraging, it has also been slow coming. The benefits of green roofs have been undisputed for several decades, but the industry itself is perceived by many as still being in its infancy.

“There is no green building technology that can provide as many benefits both public and private as green roofs can. Green roofs and walls are really a critically important piece of the urban sustainability future,” “says Green Roofs for Healthy Cities’ Founder and President Steven Peck.  “But green roofs and walls as a growing industry are still very much in the early stages of development.”

“The fact that the District once again leads the nation in installation of green roofs is another example of how our government, private organizations and individual residents are working together to ensure that we are the most sustainable city in the nation,” former D.C. Mayor Vincent C. Gray said in a press release. “Green roofs are part of the solution for capturing stormwater and cleaning up our local rivers, and I am proud of the work of everyone who has helped us achieve this honor once again.”

Unfortunately, not all cities are as green-roof friendly as D.C., and policy and zoning issues can majorly impede on the growth of this promising urban agriculture niche.

“There are some changes that have been made and continue to be made in terms of policy. There can be some barriers from a land-use planning perspective. There can be barriers in place associated with the tax treatment of rooftop farms, and there can be zoning that prevents farms from being built on certain properties because it’s not zoned that way,” says Peck.

These barriers are the primary reason Peck started Green Roofs for Healthy Cities—a nonprofit industry association dedicated to expanding the green roof and wall industry across North America. Peck founded the organization in 1998 with a firm belief in the societal benefits of green roofs and a commitment to growing the fledgling industry.

Green Roofs for Healthy Cities engages in both political and educational activities that support the rooftop agriculture industry. It advocates for green roofs to local governments and offers green roof training programs, including a green roof professional accreditation program.

Peck hopes that by providing education and reducing barriers to green roofs in cities, Green Roofs for Healthy Cities is contributing to solutions that address the larger sustainability issues of modern urban living. And, in Peck’s mind, sustainable food is among the most urgent of these issues.

“I think we need to strive to increase dramatically the amount of food that we raise in cities. We’ve got all the ingredients we need to make that happen. We’ve got people who need jobs, we have space that can be used to produce, we’ve got the demand for the food in cities, we have the compost and the nutrient flows, we have spaces on ground as well as on land to grow food. All we need to do is establish the systems, the branding, the policies, and the financial incentives to try to make more of these projects take place,” says Peck.

From Farm-to-School to Urban Aquaponics, Come Learn about the Future of Local Food at GrowRIVERSIDE!