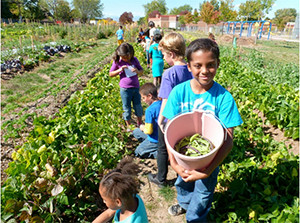 The Colorado state legislature has taken the first step towards passing a bill supporting statewide farm-to-school programs. House Bill 15-1088 seeks to build the capacity of farmers by helping them overcome economic hurdles and connect with school districts interested in serving fresh, local products to their students. The bill was introduced by Representative Faith Winter and passed the House Education committee last month.

House Bill 15-1088 is the result of years of research and work with public school districts across the state of Colorado. As a response to an increasing interest in farm-to-school programs, the state legislature created the Colorado Farm to School Task Force in 2010. According to Jeremy West, the nutrition director of the Greeley Evans school district, the goal of the task force was “to develop a framework, share best practices and identify and address some of the big struggles and roadblocks.”

Starting in 2006, surveys done by the Colorado Institute of Public Policy and Spark Policy Institute consistently identified the same strengths and needs as the state worked towards expanding farm-to-school programs. School districts proved to be fully on board. Surveys of school nutrition directors revealed that, “there’s a huge awareness and high demand on the school side,” according to Lyn Kathlene of the Spark Policy Institute. Producers, especially small producers, were also excited to sell to districts. However, both school nutrition directors and producers expressed concerns about food safety requirements and financial considerations.

“Schools are used to buying from mainline vendors that bear the safety liability,” explains West. “Farms are required to submit food safety documentation in order to sell into their systems. The existing nationwide benchmarks for Good Agricultural and Good Handling Practices are extensive and expensive. Small farmers often don’t have the administrative systems or capacity to administer this.”

According to Kathlene, a recent Colorado State University Extension survey revealed that meeting safety requirements “costs producers with fewer than 100 acres four times as much per acre as it costs larger producers.” Yet smaller farms also consistently express more interest in working with public school systems.

While Colorado farm-to-school advocates have been working on making safety practices more small farm-friendly, they also began to discuss legislative action as part of the solution.

Explains Kathlene,  “We weren’t looking for a legislative solution unless we needed one. But after four years of work, we realized that even if our schools had more money, that wouldn’t fix the producers’ fundamental challenges.”

House Bill 15-1088 seeks to address these challenges through direct grants to farmers. The bill would provide a total of $1 million in assistance to farmers for a five year period. Farmers can receive a maximum grant of $30,000 per year, and farms of any size are eligible.

Healthier Colorado, a new 501C4 working in conjunction with the Colorado Farm to School Taskforce and the Colorado School Nutrition Association, has been essential to making the legislation a reality. The group conducted listening sessions throughout the state to identify Coloradan’s health priorities. Residents consistently identified the need for more fresh local food in the schools.

According to Kathlene, “They took the idea and found a sponsor in Representative Winter. This bill is Healthier Colorado’s number one legislative priority this year.”

Both Kathlene and West cite concerns about Colorado’s current education budget as the main objection to the bill in the legislature. Colorado’s funding for education has dropped significantly in the past five years. According to Greater Colorado Education, Colorado public schools served over 125,000 students but only received funding for 35,000.

“Healthier diets are connected to better academic and behavioral outcomes in public schools,” states Kathlene, who also points out that House Bill 15-1088 supports small and mid-size producers, opens up new, stable institutional market for them, and generate economic activities in local communities.

“Farm-to-school helps me meet the regulations of the Healthy Hunger Free Kids Act of 2010,” adds West. “Farm-to-school program helps me lower sodium, lower fat, increase fiber and have a higher nutrient density for my students.”