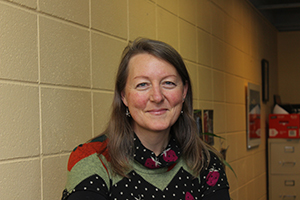 Roaring Fork Food Policy Council Founder and Director Gwen Garcelon has a lot of experience trying to effect change on complex issues. For ten years, she worked as a grassroots organizer for the D.C. based nonprofit Results, trying to end world hunger and poverty. Although she was laid off from this position when the recession hit in 2008, she has not lost her drive to tackle complicated and seemingly intractable issues. Most recently, she has set her sights on one of the most complex yet pressing issues we face: creating a more sustainable food system.

Garcelon helped found the Roaring Fork Food Policy Council in 2012 to promote collaboration among local food stakeholders in the Roaring Fork Valley of western Colorado. Although many important relationships were already in place— local food producers, growers, processors, restauranteurs, and other stakeholders were already talking about the issues informally— Garcelon wanted to establish a formal coalition that would make a more concerted effort toward creating a sustainable regional food system.

Since she started the council, Garcelon has written grants, organized local food meet-ups, and served on the steering committee of a statewide local food coalition. She has also been utilizing the strengths she developed as a community organizer to canvas the community, create relationships, and build a network of stakeholders who can help strengthen the local food infrastructure in the Roaring Fork Valley.

“I’m an organizer by profession, and I had a feeling that if we were going to figure this out, I really needed to go out and talk to people and start understanding the issues, challenges, and opportunities,” says Garcelon. “So it’s been a lot of tracking people down, understanding what different organizations are doing, and what different producers are doing.”

Some of the organizations that Garcelon has established relationships with include LiveWell Garfield County—a nonprofit organization dedicated to promoting healthy eating and active living, the Rocky Mountain Farmers Union, and the council’s fiscal sponsor— the Community Office for Resource Efficiency (CORE). Garcelon is particularly excited about the council’s relationship with CORE and the message it sends about the food system’s role in the larger issue of resource efficiency.

At the moment, the food policy council is focused on performing a Food Hub Needs Analysis study to gauge the need for a food hub in the Roaring Fork Valley. Through the needs analysis, which should be completed in the next few months, the council will use surveys, interviews, and focus groups to determine what needs a food hub could fill in the area.

While the food hub’s business model is entirely dependent on the results of the needs analysis, Garcelon has already done some brainstorming about what a food hub could look like in the Roaring Fork Valley. Some of her preliminary ideas include an online information sharing site that connects people with local food resources, an online farmers’ market that could act as an incubator for small growers, and a small demonstration farm that could serve as an educational tool for the hub. Of course, Garcelon says the implementation of any of these ideas relies on two important factors: the results of the needs analysis and funding.

“It remains to be seen what kind of business model could be sustained and where funding would come from,” says Garcelon. “I think if we could show some options and some of the needs that are out there, and start to put together some potential models, that hopefully funding would follow that.”

With the needs analysis still in process, Garcelon is trying not to get too ahead of herself by planning the logistics of the food hub. She is, however, staying focused on the overarching goal of the council and her reasons for tackling the issue of sustainable food in the first place: the health and future of our communities.

“I think it all comes down to healthy communities— communities that are centered around a connection to the land, a reverence of the natural resources, and a commitment to taking care of all the members of the community,” says Garcelon.