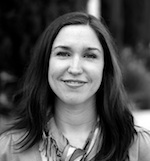 Clare Fox is the Director of Policy and Innovation for the Los Angeles Food Policy Council, an independent non-profit created by the City of Los Angeles to advance food systems policy. In this role, she collaborates with a large network of food advocates and public and private sector partners to catalyze projects and build leadership capacity build Southern California’s local food system, with an emphasis on food access and equity, urban agriculture, street food vending, and community economic development.

Fox shared her work in a panel discussion at the Seedstock Reintegrating Agriculture conference in November. We caught up with her after the conference to find out more about more about her efforts to create a local food system in L.A.

Seedstock: Describe the path of your career; how you did you come into your role at the L.A. Food Policy Council?

Clare Fox: My background was doing social justice and community organizing work around a broad array of issues. I’ve always had an affinity for nature and a concern for environmental issues. In my twenties, I had some health issues that prompted me to look into my diet and learn how to heal myself through food.

All those threads sort of swirled together just before I went back to school to get my Masters in Urban Planning at UCLA, and made me think a lot about the food system: how it works and how it’s not working with regard to environmental sustainability, but also the fact that so many communities don’t have access to healthy foods. I was in the position where I was able to bring healing foods into my life and my body for my own health, and the fact that there’s so many communities that don’t have that as an option available to them, I felt was a grave social justice issue. For that reason, when I studied urban planning, I really wanted to focus on food systems and access to healthy food for communities as a community economic development strategy.

So when I graduated and was working on different projects after school, I remained involved. I actually became one of the co-chairs of one of the working groups. That was just a volunteer gig. Then, the opportunity arose to be a part of the team.

Seedstock: What are some of the innovations of the food policy council model that inspire you?

Fox: I think what’s innovative about food policy councils is that they’re designed to break down silos. That’s their purpose. The model of a food policy council would work really well in all kinds of policy and social change sectors.

Otherwise, you’re creating solutions in a silo, and you might be creating problems for someone else up or down stream. You’re not thinking holistically, and therefore you’re not going to have the same kind of sustainable impact that you hoped for, if you’re only seeing it through your own lens.

That’s what I think is innovative about food policy councils, that they are designed to be cross-sectoral initiatives. You’re saying “Let’s bring all of our minds together and start to see the big picture. Get that bird’s eye view on what’s really going on.” Hopefully from that vantage point, our solutions will be more transformative.

Seedstock: How do you bring all those different minds together to form the council? How do you make sure that everybody who needs to be involved, is involved?

Fox: That’s what I think is unique about the L.A. Food Policy Council. All food policy councils essentially are made up of experts, leaders, and stakeholders that can lend a critical perspective that you need for the conversation.

We have a council of 40 leaders. All of them very seasoned in their work. Everything from nonprofits, public, and private sectors, people with decades of professional experience that they bring to the table. We call them “The Leadership Board”. Outside of that, we also have the working group structure. The working groups are collaboratives of individuals and organizations who come together around certain issue areas, and are open to anybody. We have an Urban Agriculture Working Group, a Sustainable Seafood Working Group, a Healthy Food Retail and Food Equity Working Group, etc. Each workgroup has a chair, and they’ve worked very, very well. Some of them have spun off and become full-blown campaigns.

For example, we’re working to legalize sidewalk food vending in the city of L.A. That started as a working group of the L.A. Food Policy Council, but now it’s actually a full-on coalition that’s led by other organizations.

We consider that a success, because the work grows and capacity in the movement grows, and so we don’t need to “hold on” to a working group if it’s going to end up being something much bigger with so much more leadership coming from different sectors and angles.

We also proactively facilitate networking. Every other month for the last three years, we’ve hosted network gatherings. It used to be just a gathering place where all the working group members would come together, but then it kept growing and growing. People come regularly to the network or come for maybe the first time, and they’re not necessarily going to be in a working group, but they have a voice in that space. At these networking events, we’re playing around with different models for collecting ideas and questions and thought leadership from the broader field of stakeholders that care about these issues. Whether or not they can actually commit to a working group or not, they have a venue where they can be heard.

It is really a challenge to make sure that all voices are at the table. It requires intentionality and thinking about who is historically marginalized and excluded from policy conversations in society, and really being mindful of the dynamics of race, class, and gender, and all of these elements that have systemically excluded people. In my opinion, it’s not enough to just create a structure. You have to actually very intentionally think about how you create relationships of trust across different communities.

Seedstock: What have been some of the greatest successes of the LA Food Policy Council?

I think that’s a great example of how a small collaborative of people through a working group can move forward policy change. I should say “small” in a sense like the working group itself was small, but it represented a larger coalition of people.

Policy change is one thing, but the working groups also give life to projects and initiatives that are filling a gap. An example of that is the Healthy Food Retail Working Group. At the time of its formation, there were a lot of new corner store conversion projects taking hold in LA. These are programs to bring resources to small corner stores and neighborhood markets in low-income communities, to help them sell healthy food, because they are the existing food retail landscape.

Because there were already programs going on, the question before the working group was, “How do we make sure these programs succeed? What’s missing? What ingredient is not there that we feel like we can contribute to help sustain these projects?”

What they decided was that there needed to be a place for ongoing technical assistance for the corner store owners, so that once they go through their corner store conversion, they have ongoing training so that they’re able to successfully sell these healthy food products. That gave rise to the very first neighborhood market training. This was in 2012, and since then, it’s become an initiative of the Food Policy Council. We now call it the Healthy Neighborhood Market Network. It’s a series of trainings that we provide all year long. We’ve trained probably close to 300 corner stores at this point, since 2012. The working group was very smart to see that they could fill a gap.

Finally, our research and policy analysis is important. Our office has produced the Food System Snapshot, which we released in 2013. It aggregates over 100 indicators in 9 different food system categories that we can all use as a dashboard for tracking change in our regional food system. We will continue to publish that document; we’ll release an update in 2015. The idea is that we can all use the same indicators to gauge how well we’re doing in terms of environmental sustainability, in terms of worker rights, and in terms of healthy food access.

Seedstock: What have been some of the greatest obstacles and barriers to the work you are doing, and how do you address them?

Fox: We know that our lives are shaped by policy and systems, but you can’t regulate your way into solutions. There’s no silver bullet. One of the questions of at th Seedstock conference panel was “What’s your “silver bullet” policy?” We’ve really seen that, specifically with the question of expanding access to healthy food and why some neighborhoods have such a dearth of healthy food retail options, there is no “silver bullet” solution. It’s a very multi-generational, systemic issue of disenfranchisement.

It goes back to bank redlining and chronic disinvestment in communities of color by corporations, and white flight from the urban core. There are so many historical elements, just in the 20th century. We could take it way back and look at how our country was founded on inequity with slavery.

So, for a food policy council to say, “Okay, we need more healthy food retail in South LA,” that’s going to have to involve multiple strategies and tactics. You can’t create a policy that’s going to sprout grocery stores tomorrow. But you can ask “What are the systemic barriers?”

It’s a very long process, and there is no silver-bullet policy. It’s a lifetime’s worth of work.