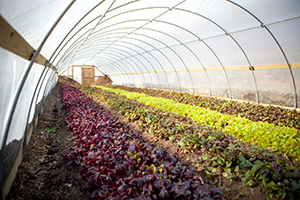 It’s easy to label urban farming as the solution to serious societal problems like food deserts, economic development, and obesity. But not all urban farming is alike. Some methods are bound to be more successful, profitable, and impactful than others. The question is which ones are giving cities the “biggest bang for their buck,” so to speak, and which ones are more good for morale?

The answer to this question is complicated. Urban agriculture in U.S. cities is evolving to include operations on a wide spectrum that ranges from small-scale community gardens to high-tech aquaponic and vertical farms.

Let’s take a look at each.

Back to the Land

Assistant Professor of Urban Studies and Planning at Portland State University Nathan McClintock says that the value of land in urban environments can act as a major barrier to land-based commercial production. Short of government subsidization, McClintock says, it’s difficult for these types of operations to attain profitability.

“Unless you protect it from market logic somehow, then you can’t really scale up to any great extent,” says McClintock. “On that front, I would say that the only places where you can have big enough farms or enough farms in urban areas are places with devalued land.”

Although he remains a skeptic on the potential for profitable urban commercial production, McClintock does believe that certain land-based methods, like community, residential, and nonprofit gardens, are more promising in regard to their ability to get local, sustainable food on plates and as effective tools for community development.

“Most of these gardens, I think, cultivate community, because if you’re tending your own bed, you’re in a garden alongside someone tending their own bed. Most of those types of situations are really important for community cohesion and community development,” says McClintock.

While land-based agriculture may simply be an urban version of what happens in rural environments, rooftop agriculture is entirely a product of its urban surroundings. Rooftops abound in cities, and most are underutilized. Urban agriculture on rooftops has obvious economic advantages because it takes spaces that have little other use and turns them into a source of revenue for urban farmers and building owners.

The issue of finding affordable farming space is not completely resolved in rooftop agriculture, however. According to an article published on National Public Radio’s blog The Salt in 2013, many building owners are hesitant to rent their rooftops to farmers because the concept is still new, relatively untested, and raises liability and maintenance concerns.

Other major issues associated with rooftop farms include high start-up costs and extreme growing conditions. But many urban agriculture enthusiasts believe the benefits of rooftop farming outweigh its challenges, and it continues to grow. Major cities like Chicago and New York have prominent rooftop farms that garner attention and demonstrate the potential of this relatively new form of agriculture.

In recent years, controlled environment agriculture has evolved far beyond the familiar greenhouse. Hydroponic, aquaponic, and vertical farms are the new frontier of urban farming, and they come with a lot of promise, as well as a unique set of issues.

“In commercial agriculture, CEA can increase efficiency, reduce pests and diseases, and save resources. Replicating a conventional farm with computers and LED lights is expensive but proves cost-efficient in the long run by producing up to 20 times as much high-end, pesticide-free produce as a similar-size plot of soil.”

It’s All About the Market

While analyzing the potential of various types of urban agriculture, it’s important to remember that other factors, such as location and business model, significantly impact the success of any urban farm—what works in one instance may not work in another.

For example, in a city with devalued land and a lot of abandoned lots, like Detroit, land-based methods may make sense, but in cities where land values are high and land is scarce, like New York, land-based methods won’t be profitable. According to Wortman, besides land values, other factors influencing the type of urban agriculture successful in a given city include climate and soil pollution.

“An urban farmer in Florida can grow fruits and vegetables 12 months per year and perhaps find land with limited levels of industrial or heavy metal contamination. For that farmer, growing hydroponically in a warehouse or other controlled environment may not be ideal. However, an urban farmer in Chicago where most soils are contaminated with lead and the growing season is only seven months long may consider controlled environment agriculture in a vacant warehouse to extend the growing season and limit potential health hazards,” says Wortman.

In addition to location, business model also plays an important role in success. Tailoring business to the demands of the market is the most crucial component of a successful urban agriculture operation, says Michael Olson, author of MetroFarm: The Guide to Growing for Profit In or Near the City and host of Food Chain Radio.

“The only crops to grow for impact and profitability are the crops the market tells you to grow. To have any hope of generating profit, all farmers, and all business people, must satisfy the need of the market, and only the market can tell you what it needs,” says Olson.

“Urban farmers need to leverage their proximity to urban populations by providing these value-added goods and services, otherwise it is far more profitable to grow fruits and vegetables on 10 acres, 75 miles outside of a city, where food can be easily trucked into the city, or in California for that matter,” says Wortman.

Milwaukee-based nonprofit Growing Power exemplifies the type of diversification promoted by Wortman. Growing Power has farms in Milwaukee, Madison, and Chicago which range from community gardens to greenhouses to aquaponic operations to vertical farms. But Growing Power’s impact extends far beyond what they grow. They host workshops, youth job training programs, tours, and conferences, and as a result have become one of the most respected models of urban agriculture in the U.S.

“Growing Power in Milwaukee is a fantastic example because it is so rooted in the community. They’re fantastic in that they’re doing a bunch of intensive production; they have compost production, they have aquaponics, and they’re growing year-round in indoor greenhouses. They’re hiring a lot of people from the community as well, so I think they’re definitely an organization that’s been very successful,” says McClintock.

While Growing Power is certainly making its mark on urban agriculture, there are no easy answers in the quest for the most successful and scalable urban agriculture model. Like any business owner, an urban farmer need to do their research and carefully consider a variety of factors. According to Olson, many of these factors relate to the city in which they operate, their market, and their goals as a farmer. If these factors are taken into account, then impact and profitability are realistic goals, he says.

“The sad truth about urban or metropolitan agriculture is that there really is no plug and play model for everyone.  Every successful metropolitan farm I have seen, and I have seen many, was developed to conform to the needs of market, environment, and farmer, and was therefore as unique as a thumbprint on the land,” says Olson.