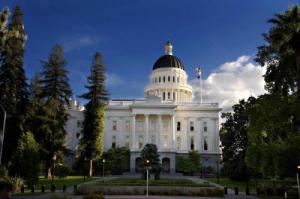 The Golden State’s farm-to-table movement has had friends in high places working on their behalf in recent months.

This past September, California Governor Jerry Brown signed seven pieces of legislation in honor of Sacramento’s Farm-to-Fork week, an annual event that celebrates locally produced foods and promotes getting it into the hands of local consumers.

“The idea of Farm to Fork is very popular at the local level,” says Dr. Milt McGiffen, a plant physiologist and cooperative extension specialist at the University of California, Riverside. “This legislation is aimed at providing healthy food for the underserved population, so it is not just about boosting local ag but more about getting healthier food to the poor and others.”

Drafted by Assemblyman Richard Gordon (D-Menlo Park), AB 1990 is one of several of these bills intended to make fresh California-grown food more accessible  to state residents.

Noting the growth of community and school gardens in the last few years, Assemblyman Gordon sponsored the measure to provide a regulatory framework for these community food producers. The measure permits them to directly market their produce to the public and establishes consumer health and safety standards tied to their sale.

AB 2561 protects citizens’ personal gardening rights if certain conditions are met. The measure prevents landlords and homeowners’ associations from restricting renters’ ability to grow food in portable containers and property owners from growing food in their own backyards.

AB 1871 cracks down on vendors who make fraudulent claims at farmers’ markets. It modifies existing law to make misrepresentations of a product’s area of production, producer identity, manner of production, or use of the term “California Grown,” punishable by a fine of up to $2,500 or six months in county jail, or both. It also allows certain state and county authorities to levy fines between $500 and $5,000 for each violation in lieu of prosecution.

Sponsored by Assemblywoman Susan Eggman (D-Stockton), AB 2241 changes fees and regulations related to contracts designating land for agricultural use to encourage the use of solar energy facilities on “marginally productive or physically impaired land.”

The Farm-to-Fork office established under California’s Department of Food and Agriculture by AB 2413 is charged with “ promoting and protecting the agricultural industry of the state, and seeking to enhance, protect, and perpetuate the ability of the private sector to produce food and fiber in a way that benefits the general welfare and economy of the state.” Its duties include working with the ag industry and other organizations to increase access to produce in underserved California communities and schools.

Finally, AB 1789 requires California’s Department of Pesticide Regulation to conclude a reevaluation neonicotinoid pesticides by July 2018. The department has been reevaluating their use since 2009. Some research suggests neonicotinoids could play a part in the massive wave of U.S. honey bee deaths known as Colony Collapse Disorder, though there is currently no scientific consensus on a link.

Dr. McGiffen calls the legislature’s insistence on a timeline for reevaluating neonicotinoids “prudent.”

“Keep in mind that California has the greatest need for pollinators, and we have some crops that take an exceptional number of pollinators, like almonds and melons,” he says. “So while this is of international concern, it is particularly acute here in California.

“I think putting a timeline on the review of neonicotinoids is responsible government, and the legislature should be praised for keeping an eye on state agencies,” he tells Seedstock. “Creating an office of Farm-to-Fork and several items related to local ag could be big in the long term.”

Still he warns the measures could very well be a “double-edged sword.”

“They may be able to do some good things,” he says, “but with that you will also get more regulation and possibly fees that might make it impractical for some producers.”