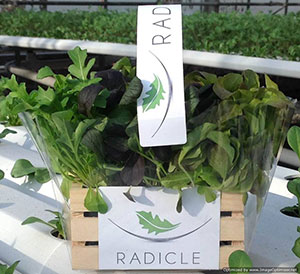 Named after the first root to appear from a seed, Radicle Farm Company of New Jersey is rethinking the sustainable leafy greens concept. Through an aggregated network of local hydroponic farms, Radicle offers its living salad products to the wholesale and retail market.

“We want to be large,” says Christopher Washington, Managing Director of the company that started in 2013. “All the research that we’ve done has indicated that the consumer wants to support local product; it’s not really groundbreaking. What is groundbreaking is that companies that get the most traction are private brands in agriculture.”

The startup developed from a chance meeting at a party between Washington and James Livengood, Radicle’s Production Director. With experience creating farms from the ground up both in the United States and Africa, Washington seemed the logical choice to head up Radicle’s team. A greenhouse management contract with the folks at Garden State Urban Farms in New Jersey ignited production.

Funded by a few investors and private funds, Radicle offers several varieties of living salads to the Brooklyn area. Their high-end product has attracted restaurants, caterers and grocery stores alike. Chef-friendly produce such as arugula, Japanese peppergrass and Shanghai spinach are sold with roots attached in recycled packaging for immediate consumption or long term planting in the garden.  By narrowing their focus and, as Washington states, “doing one thing well,” Radicle is enjoying early growth and branding success.

With six core employees and an aggregated network of local farmers, Radicle’s hydroponic greenhouses provide customers with produce year round.

“In summertime there is so much production going out that the price drops,” says Washington. “During the wintertime because we have greenhouses we make the bulk of our money. We are gearing up for the winter and hoping to have a wonderful winter.”

Radicle manages 10,000 square feet of greenhouse space as well as 7,000 square feet of outdoor grow space. With approximately 600-1,000 pounds of produce to sell every week, the company distributes mostly to the wholesale market, but has plans to develop its retail market share.

“If you really want to make money in farming I believe that you have to get into the retail game; you have to begin to move toward what traditional agriculture was able to do,” says Washington. “We sell about 70 percent to restaurants wholesale. So that range is at a higher price point that what you would sell to a Home Depot. We are able to see positive returns but at the same time we have retail product where we’re looking at 60 percent margins. That cannot happen in the wholesale game.”

“I think because we are using new technology we’re able to bring down that barrier of profitability. I think that what we’ve learned is that we have to move numbers,” says Washington. “There are major clients that want a lot of product. You can’t get that contract until you have the product and you can’t grow the product until you get that contract. You have to take on a lot of risk to be able to do something like that; that’s probably the truest barrier that farmers have. If you are willing to take on that risk there are a lot of opportunities.”

Constant research and development has given Radicle its edge in the market, but Washington believes the trend towards local foods is growing with enough market share for everyone that wants it.

“All the growth in the sector is in private brands and that is something that is truly unique to our industry. What that means is there are a lot of opportunities for small regional brands to grow and develop. There doesn’t need to be competition for that because it’s growing so quickly. We definitely want to collaborate not compete with people in our market and carve out a space with this living salad product,” he says.