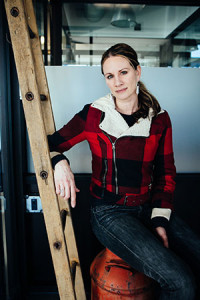 While Maiocco loves agriculture and grows nostalgic at the sight and smell of cow manure, she is concerned about the current state of big agriculture. She feels that eaters want and need food that is free from pesticides and antibiotics and is not genetically-modified.

“They don’t want chemicals for dinner,” she says.

“I found it difficult to access local foods at farmers’ markets,” she says. “Local farmers needed a direct way to sell.”

She addressed this problem by implementing existing technology to solve an age-old problem. “Because of supply and demand, a simple solution and mechanism was needed,” Maiocco says. “Technology has come so far. Now is the right timing, and we have the right technology.”

Farmers who wish to sell through Farmstr must utilize organic growing practices. After a rigorous vetting of their farming methods, those who meet this standard may set up a seller profile and post items they want to sell. It is free to sign up, and Farmstr keeps 6.5 percent of each transaction.

Farmstr makes numerous drop sites available where producers can leave food for customers to pick up. Currently, all drop sites are located in Washington State, and include three in Seattle and one each in Bellingham, Everett, Issaquah, Redmond and Tacoma.

Maiocco says that Farmstr will probably expand outside the Pacific Northwest, but declined to provide further details at this time.

Farmstr is only 10 months old, and Maicco relied on the support of her family and did not take a salary for two months so her fledgling company could get off the ground. But the strong response from both buyers and sellers proved to her that Farmstr has a viable future. Now, the company employs four full-time workers (and is looking for two more), and two interns. It’s not profitable yet, but “we’re getting there,” she says.

Like any new business, Farmstr has encountered obstacles along the way. Maiocco says that securing startup funds was the main hurdle, and that now, its employees are underpaid but very “passionate about this.”

As its inaugural year draws to a close and a second year dawns, Maiocco is excited about her company’s future.

“It’s going really good,” she says. “All the lights are green.”