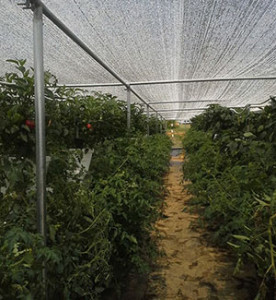 Cedar Point Church in Maryville, Tennessee started growing its hydroponic garden for two reasons: to develop a program offering a sustainable and healthy food source to its church family, and to build a sense of partnership between church members and the community.

While the garden is still in its early stages (it was started about three months ago), Kurt Steinbach, the church’s lead pastor is enthusiastic about the growing produce. Currently, Harvest Farms Co-op, the name of the church’s hydroponic gardening operation, grows several varieties of tomato, bell pepper, hot banana peppers, Anaheim peppers, green leaf lettuce varieties, eggplant, squash, zucchini, cucumbers, and green beans. In late June, the co-op was preparing for its first harvest.

“We sell to members and also donate 20 percent of the harvest to those in the community in need, such as single moms, widows, disabled, and those unable to purchase fresh vegetables, otherwise,” Gayle Abbott, marketing and membership associate, says. The cost to join the co-op is $60 a year and anyone is welcome to join. Currently, the co-op has almost 100 families.

Co-op members get member discounts, and have access to community service projects and classes.

“The members expressed interest in learning about things, such as canning, making jams and jellies, and also taking classes on nutrition, food prep, meal planning, and so on,” Abbott says.

Harvest Farms’ purchased its hydroponic system at Florida-based Verti-Gro. The setup is very similar to the system at Walt Disney World’s Epcot Center. The organization didn’t have a difficult time setting up the system, but hired help to move the process along.

“We did hire independent contractors to provide plumbing, electrical, and land prep, as well as digging services,” says Abbott. “Considering the many variables, the cost was around $30,000.”

Several members of the church’s congregation also helped set up the operation, and a few even traveled to Florida to learn how to use the system.

The hydroponic system is computer-operated. All the plants are in shade houses, which enables them to get enough sun and warmth. The system also features misters and screens that keep out pests. And while the garden’s setup is quite sustainable, the Church has has to dig a well to serve as a source of water for the garden.

While the Church ran into a few hurdles when installing the hydroponic system, such as learning how to use the equipment, members have been able to solve all problems so far.

“I think the biggest issue initially was perhaps land prep and also irrigation supply, for which a well was dug to be able to provide water with the quality preferred to accommodate a site of this size,” Abbott says.

In the future, Abbott would like to double the size of the existing farm by the end of 2015, and also add several more fruit and vegetable varieties, and an aquaponics system.

When the concept was introduced to the congregation, the farm concept has been well received.

“The church body is excited about serving the community and the potential impact the co-op will have on local families,” Abbott says.