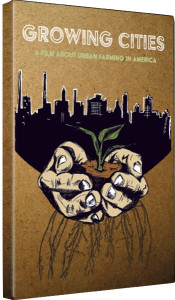 Seedstock recently had the opportunity to speak with the film’s director, Dan Susman, on the making of the film.

Seedstock: When did you get the idea of making a film about urban farming in the U.S. and why?

Susman: Andrew Monbouquette, the cinematographer, and I came up with the idea at the end of college. We just wanted to tell the stories of the people who are gardening all across the country, to put a spotlight on those people who are doing something good for their communities by doing something with agriculture in their own back yards.

Seedstock: Can you talk a little about the process of making the film?

Susman: We started the filming in the spring of 2011. Basically, we took a trip across the country visiting urban farms—not all of them were shown in the film. We probably actually visited about 25 farms, maybe more; the film highlights about seven or eight. We finished the editing for the feature length version in August, 2013, and we first premiered it at the film festival in Portland, Oregon.

Susman: Basically, so far, we’ve shared the film with thousands of people and it’s been incredible to see the response, to see that inspiration and how excited people are after they watch it. But we want to share the film with millions of people.

The film has been accepted by American Public Television but it must be edited down to 54 minutes to be shown on public broadcasting stations. Let me tell you, going from a 90 to 60 minute film is hard, but 60 minutes to 54 is harder! It’s almost like going back to the drawing board. The costs involved are for transferring from the digital to tape medium, the editing, and everything that’s needed for getting the film ready for television. If we can’t raise the money, we won’t be able to do it.

Seedstock: How many stations are slated to be airing the film and when?

Susman: We haven’t yet officially offered it to specific stations. We have to have it all completely done and enhanced and ready before we can do that. That said, American Public Television will only take a film if they project that at least 75 percent of PBS stations will air it. And we believe that we could get close to 90 percent or more, with us making calls directly to stations and working, ourselves, on getting stations to air it.

Seedstock: What challenges were faced in making this film?

Susman: We could talk all day about that! The process of shooting on these farms was, sometimes, really challenging—there would be really loud noises like dogs barking or traffic noises. There was the heat—sometimes it would be 100-plus degrees. Getting a good interview could be challenging. There were so many things that would make the filming itself very full of  challenges, but it also made it creative—we had to be creative in dealing with them.

Seedstock: What types of urban farming are covered in the film?

Susman: We covered everything from rooftop farming to people having goats and chickens in their back yard. Basically, we included all types of urban farms.

We were also looking at all the different reasons that people were growing their own food. We found that it’s not just a hipster movement or something like that, it’s really all types of people from literally all walks of life. It’s about community and changing people’s lives and how they can interact in the community. It’s about so much more than just growing food; it’s a means to create community.

Seedstock: Will the film be shown outside the U.S. and, if so, where and when?

Susman: Yes, it’s already been screened all over the world at film festivals. We’ve shown it in Rumania, Russia, the UK, Australia, Croatia, Canada—all over the place. It’s definitely made the rounds! What’s interesting is that we found that the stories in the film really resonate with people all over, no matter where they’re from, and that’s really cool.

Seedstock: Why is it so important that Growing Cities be aired on PBS stations throughout the U.S.?