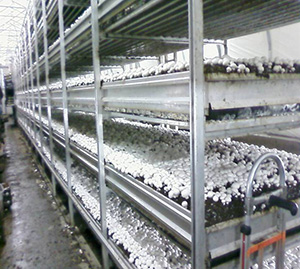 Foley has been with Premier for three years and is very excited about being involved in the forward-thinking company, he says.

“It’s a fun organization to be part of,” he says. “We’re using a technology that is unique to the U.S.—a Dutch-style farm. There are only a few other farms in the country that have this technology. We’re working on optimizing it and learning how to do it right, getting a better product. We’re always striving for continuous improvement.”

According to Foley, the technology that has been developed in Holland is more efficient than what has been historically used in the U.S., and allows the company to support sustainable farming with a closed-loop system.

The farm has an automated climate control system and contains air handlers, aluminum beds  and loading/unloading equipment,” he says. “One advantage of the aluminum growing beds is  that you lower the risk of pathogens, compared with conventional wooden beds. It has a higher safety level—for workers as well as food safety.”

Another way Premier’s method is friendly to the environment as well as more efficient has to do with the recycling of all of the company’s waste products.

“All waste water is used for compost,” says Foley. “It’s better for the crop because this water has such a rich nutrient quality, dark brown—you don’t want to drink it,” he emphasizes, laughing. “It’s supercharged and speeds up the composting process. And you’re getting it for free, just by recapturing it!”

Also, utilizing recycled products from elsewhere helps make up the ingredients used in the compost, according to Foley.

“We use recycled gypsum from wallboard and, for the nitrogen, we use chicken litter,” Foley says. “This supplies the primary nitrogen for mushroom farming.”

The reasons for holding fast to sustainable farming are multifold, according to Foley.

“It’s a more reliable way to grow,” he says. “You have the benefit of reducing your carbon footprint and being part of the sustainability movement plus you’re more prepared for the challenges that come your way. Natural resources are becoming scarcer, water and power prices are going up, the cost to haul out waste is going up. It’s kind of like strengthening the foundations that hold your business up so you can keep operating smoothly; when challenges come up, you can adapt. It just makes sense.”

“We were interested in tying in with the local community in helping the environment,” he says. “We decided to have a river cleanup project on the Sacramento River. As it turned out, it just happened to coincide with California’s Annual Cleanup Day—it’s actually an international event, called Coastal Cleanup Day.

“It sets a measurable standard, like the LEED Green Building Certification,” he says. “It’s a new concept but we’re looking at pursuing that in the coming year.”