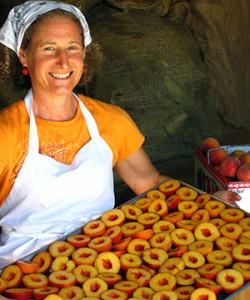 Rena Basch of Locavorious wintertime CSA holds a tray of peaches from Kapnick Orchards inside its processing kitchen. (photo by Andrea Starbird)

In his groundbreaking book “The Omnivore’s Dilemma,” food writer Michael Pollan addresses the problem of choosing what to eat.

Now, Locavorious, a CSA in Ann Arbor, Michigan, has solved “the locavore’s dilemma” of how to eat locally during the cold months of winter.

Founded and owned by Rena Basch, Locavorious is a wintertime CSA. Instead of offering fresh produce, they prepare and package local produce when it is ripe and fresh, and store it in a freezer. Then CSA members pick up their harvest shares throughout the winter.

Basch started Locavorious in 2008 with 90 CSA subscribers receiving 2,000 pounds of food. Six years later, she provides 15,000 pounds of produce for 250 subscribers. Locavorious offers 20 different fruits and vegetables. With the exception of edamame, which is sourced from Ohio and Ontario, all are grown within the state and the vast majority is grown within a 100-mile radius of Ann Arbor. Locavorious has formed partnerships with numerous area farms to supply the produce. Last year 22 farms partnered with the CSA.

Included are blueberries, raspberries, strawberries, peaches, sweet corn, peas, cauliflower, cranberries, broccoli and, this year for the first time, eggplant. Frozen soups and broth will also be added to CSA offerings this year.

Locavorious has been storing food in freezers owned by Zingerman’s, another Ann Arbor food and dining institution. But due to greater space needs, last week they moved freezer storage to the Washtenaw Food Hub http://washtenawfoodhub.com, located in a former grain elevator.

“I always knew I wanted to be involved in sustainable agriculture,” says Basch, who left the automotive industry to start Locavorious.

Deciding to center her CSA on meeting demand during winter came from personal experience. “I was sad when winter came and the farmer’s market had no food,” she says.

Now in its seventh year, Locavorious makes enough money to not only sustain itself, but to grow. However, profitability is not Basch’s main goal.

And because she describes the way Locavorious processes its food as “artisan,” equipment costs run high. All processing is completed by hand, and Basch says finding and keeping good labor is a challenge.

“There’s nothing in the middle for small or medium-size processing,” she says.

Growth is important to Basch, and for this reason she hired a sales and marketing specialist, Maggie Cease. Cease’s goal is to grow Locavorious to keep the business sustainable.

“The core of Locavorious is CSA memberships,” Cease says. “We need more members to join each year in order to grow successfully.”

Cease also believes that the presence of Locavorious at area markets is important to improve the company’s visibility. Currently frozen fruit and vegetables from Locavorious may be bought at Ann Arbor Farmers’ Market, People’s Food Co-op, Arbor Farms and Whole Foods Market in Ann Arbor.

According to Cease, Locavorious is part of an active local foods community in Ann Arbor. Being a part of this informal network, she says, also helps grow the business.

“It’s word of mouth and who you know,” she says. “It’s important to form connections.”

Cease says newer farmers markets are emerging in the Ann Arbor area, and she would like Locavorious to have a presence at each one.

“People who don’t know a lot about local food are a great potential market,” she says. “It’s important to expose people to any part of the local food system.”