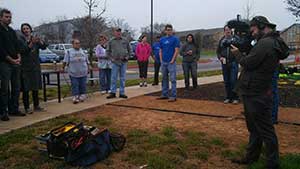 It all started with the formation of a Sustainable Food Policy Board in 2008. A year later, the board convinced the City Council to “declare its support for responsible urban agriculture and farms – those that employ water conservation techniques, composting, and nonpolluting growing practices.”

The first step was to offer gardeners and small farmers the commercial rate for water. Then came tax benefits for small farmers, and a new allowance for farmers wishing to sell value-added items on site and at farmers’ markets. Austin City Council later adopted a resolution “to enhance local production of quality food and its accessibility to residents in Austin” by establishing city-sponsored support systems for sustainable urban farms and community gardens.

That’s when Meredith Gray came on as the city’s sustainable agriculture and community gardens coordinator. Gray’s primary focus has been helping residents establish community gardens on public land. The city now hosts eight separate community gardens, has five more in development, and is reviewing two additional applications; and still the community appetite has yet to be fully quenched. According to The Austin Chronicle, The Festival Beach Community Garden currently has a 50-person wait list.

“It’s very much in an Austinite’s mentality to look at a vacant plot of land and think ‘What else could I do with that land? Perhaps I could grow some food there,’ “ Gray says.

Gray has been working to create a process for residents to apply to convert vacant lots into community gardens. The city already maintains a list of about 70 parcels of land that have been pre-identified as potentially suitable for community gardens.

“There’s a lot of land that’s underutilized,” says Gray. “Land that’s going to become a recreation center in 20 years or is going to a fire station in 20 years could be used productively right now.”

Community gardens on city property have to adhere to several sustainability guidelines. Pesticides and treated wood are prohibited.

“Technically we can’t call them organic community gardens because they have not been certified, but I think that gardeners at each community garden consider themselves organic,” Gray says.

Austin’s arid climate necessitates careful water management. The city imposes strict water restrictions and prohibits the use of automatic sprinklers or irrigation systems; all watering must be done by hand to prevent water loss.

The city has also been looking into establishing food forests.

“We are trying to encourage planting fruit and nut trees wherever possible,” Gray says.

The city is currently reviewing a proposal for an active food forest that would be maintained by a tree guild and would be open to the public, “almost like a botanical garden, you just will be able to eat what’s growing there,” Gray says.

In recent months, Gray has started getting calls from city employees in other parts of the country that are interested in learning from Austin. She tells them that cities are in an excellent position to promote agriculture, because they tend to have a lot of land that’s underutilized. Cities also have a regulatory framework in place that can easily support urban agriculture simply by removing some key regulatory barriers, Gray says.

But cities can’t do it alone, she adds. Austin has connected with several nonprofit organizations interested in promoting sustainable agriculture to form a network of organizations supporting urban agriculture

“A lot of these organizations do the programming work that we can’t currently provide on our own because we don’t currently have the funding,” Gray says. The Austin Permaculture Guild offers courses and workshops in Hugelkultur and aquaponics for community members interested in learning to gardening or farming in ways that work in concert with nature’s rhythms. Urban Roots provides paid internships to teenagers to work on a 3.5-acre urban sustainable farm. The Sustainable Food Center helps connect residents to healthy, local food and provides nutrition programming.

“We really rely heavily on our nonprofit partners to provide urban agriculture support that we are unable to provide right now because of funding and staffing challenges,” says Gray.