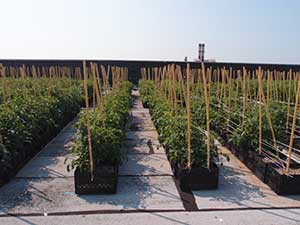 “Farming” may not be the first word that comes to mind when people think of Boston, but with December’s passage of Article 89, a new ordinance legalizing for-profit urban agriculture in the city limits, that may soon change.

This is how Edith Murnane, Boston’s Director of Food Initiatives would have it.  Appointed in 2010 by former mayor Menino, Murnane’s responsibility is to increase access to healthy and affordable food, expand Boston’s local food production, and build a strong local food economy.

“We want to make sure that all boot-strapper farmers that have one, maybe two nickels to rub together can participate,” says Murnane.

When asked about Article 89, however, Murnane takes a deep breath.

“A lot needs to happen before we start growing,” she cautions. “Article 89 is a first step.”

The new zoning code lays out specific criteria and standards for urban agriculture based on land use, farm size and farm type. Farm types include ground-level farms, roof-level farms, and freight farms. Criteria for signage and steps for obtaining a comprehensive farm review and permit are spelled out. Farms in more sensitive zoning districts, such as residential, will require a conditional use permit, potentially with added requirements.

Article 89 germinated from an idea planted by urban agricultural entrepreneur Glynn Lloyd, founder and CEO of City Fresh Foods, City Growers and his latest venture, the Urban Farming Institute.  Eager to put vacant city lots to use as productive agricultural fields, Lloyd soon discovered that zoning was the primary impediment. With help from the former mayor, he set the wheels in motion to bring about policy changes necessary for urban agriculture to flourish.

Nowhere was it written that commercial agriculture was prohibited inside city limits but neither was it clearly permitted. Article 89 expressly permits and regulates urban agriculture as a “by-right” land use within city limits.

A first step was to test the waters to see how farming on city land would look and work and even more importantly, how it might benefit the community.  To this end, temporary zoning was granted for two pilot micro-farms on city-owned land in Boston’s Mattapan neighborhood. Immediate steps were taken to engage the public.

“Starting in 2012, we began conversations on urban agriculture with citizens,” recalls Murnane. “We then had a series of committee meetings and by June 2013, we drafted Article 89.”

Several more steps and much cogitation followed.  Details of the proposed zoning ordinance were discussed with the public in further rounds of conversations, resulting in several revisions to the final draft.

In fact such care was taken to address concerns and engage the public that upon review by the Boston Redevelopment Authority, the vote for approval was unanimous, according to Murnane. After sailing through the Zoning Commission, Article 89 was delivered to the former mayor and promptly signed into law in December.

Murnane is pleased with the accomplishment but still intent on ensuring all details are buttoned up as Boston’s urban agriculture experiment moves forward.

“Even if you are an of-right farmer, you still need to get permitted,” she says.

The end goal, according to Murnane, is to design and build a robust urban agricultural community in the city. In addition to city offices such as Boston’s Inspectional Services Department and Conservation Commission, a number of independent entities are being tapped, including the Harvard Food and Policy Clinic, The Trust for Public Land, and Fathom, a Cambridge-based information design form.

In time, Murnane hopes information collected will be available to empower all citizens interested in farming.

“We are creating an online resource site with permitting guides, information about classes, and grants where people can find seed money,” she says. “We want to make sure it’s in place for everyone at every economic level, including Boston’s immigrant farmers, so we’re applying for a grant to have it translated into six different languages.”