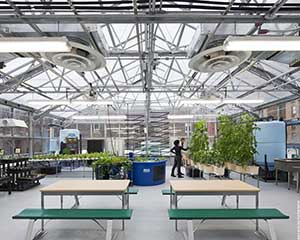 An inside shot of one of the Greenhouse Initiative Projects.
Credit: Ari Burling

NY Sun Works, a non-profit organization that builds innovative science labs in urban schools, partnered with a small group of parents at PS 333, The Manhattan School for Children, to found The Greenhouse Project Initiative in 2008.

“Through our Greenhouse Project Initiative, we use hydroponic farming technology to educate and teachers about the science of sustainability,” says Manuela Zamora, NY Sun Works director and director of education programs.

The Greenhouse Project was founded because parents and educators within New York City’s K-8 public school system were concerned about what they perceived to be shortcomings in the systems’ environmental science program.

“We, the parents, and educators began to discuss the possibility of bringing a new learning environment to our children’s school,” Zamora says. “The vision was to use sustainable urban farms on the school rooftop as an ideal hands-on learning facility, not only to teach about food and nutrition, but mostly to empower children to make educated choices regarding their impact on the environment.”

Since The Greenhouse Project’s inception, it has become an official NY Sun Works project and the pilot facility for The Sun Works Center for Environmental Studies at PS 333.

“PS 333 is a progressive school and envisioned The Greenhouse Project classroom as a fantastic opportunity for hands-on exploration. Therefore, the school was on-board from the very beginning,” Zamora says. “The red tape was at the School Construction Authority, but we worked with a great team of architects, engineers, and a very professional construction group. As a team, we got approval and we are now working at new public schools building on similar structures.”

“When we met with PS 84 parents and the principal, we knew it was going to be one of the fastest projects to get done,” Zamor says. “They were energetic, decided and committed to have a rooftop greenhouse at their school.”

While NY Sun Works does not secure funding for its partners, the organization does support all grant writing processes, and provides information and support to get funds.

“At PS 84, most funding came for public sources, mostly from council members and the borough president,” Zamora says.

According to Zamora, construction at the Brooklyn school will be almost identical to the center at PS 333.

“The school will use the curriculum developed by NY Sun Works for K through 8th grade,” she says.

“We have four hydroponic systems, NFT, Dutch-Bucket Systems, Ebb and Flow, and a Vertically Integrated Growth System,” Zamora says. “We also have an integrative pest management practice, a worm composting section, rain-water tanks, an evaporative cooling system for the hot months, and an energy corner with an energy bike where students can pedal to store energy.”

While the lessons at the Brooklyn location will be similar to the other projects, there will be more opportunities for exploration, and more space and farming. Also, there will be more systems available in the rooftop greenhouse, as well as the structure itself, according to Zamora. The new structure is controlled by a computerized system that opens the roof automatically and turns on fans when necessary.

As part of Sun Works’ partnership with schools, the organization teaches instructors how to use the systems and curriculum. All students have access to the labs for science instruction and to perform farming tasks. Every child learns about hydroponic farming and sustainability science. Students who are part of the projects get to consume all produce from the labs, too.

“They can eat it as snacks, cook, have harvest celebrations, and have farm stands,” Zamora says. “Sometimes they donate it to other organizations, such as soup kitchens or senior citizen homes. That is up to each school and is connected to their social studies curriculum.”

“Overall, we have 12 Greenhouse Project labs completed, some rooftop greenhouses, some indoor classroom conversions, that all hold growing systems,” Zamora says. “And we have about eight in development which will be done in 2014.”