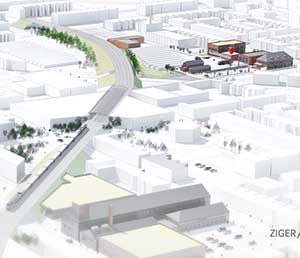 According to Greg Heller, interim president and CEO of American Communities Trust, the Food Hub should be up and running by the end of 2015. It will be home to an urban farm, farm stand and garden center, all of which will be open to the public. Spike Gjerde, a Baltimore-based award-winning chef, will have a production kitchen at the facility, which will utilize locally-grown produce and provide jobs.

Heller says the vision of a Food Hub in Baltimore was the brainchild of a group of real estate developers who wanted to revitalize parts of the city. In 2012, according to Heller, that vision began to materialize into concrete plans. Construction is set to start this summer.

Currently, says Heller, the project is still in the pre-development stage and organizers are still procuring funds and securing financing, with money coming from both the public and private sector. Sources include grants, tax credits, private equity and government support.

The goal though, he says, is for the Food Hub to become financially self-sufficient. An even larger goal is to boost Baltimore’s viability through the impact of the food economy by way of jobs and greater demand for locally produced food.

The Food Hub will be located next to Johns Hopkins University. The University will use its financial, intellectual and human resources in support of the Food Hub, says Andrew Frank, special advisor to the University president on economic development. Frank also sees the University benefitting greatly from its proximity to the facility.

In November 2013, Johns Hopkins president Robert Daniels signed a Real Food Challenge pledge, which states that a minimum of 35 percent of the University’s food purchases must be local, sustainable, humane and fair trade by 2020.

“The pledge is linked, in part, to the Food Hub,” says Frank.

Bon Appetit, a food service provider for the University, supports food entrepreneurs with contracts and will partner with the Food Hub. Bon Appetit also supplies food to the University of Pennsylvania, and works closely with Philadelphia’s Center for Culinary Enterprises, a kitchen incubator that Heller served as project manager for prior to moving to Baltimore.

The Food Hub will also emphasize educational opportunities for Baltimore’s youth, many of whom have never been exposed to agriculture. An educational garden will be connected to a classroom kitchen. It will be similar to the Edible Schoolyard project in Berkeley, California, which was started by chef Alice Waters of famed Berkeley restaurant Chez Panisse.