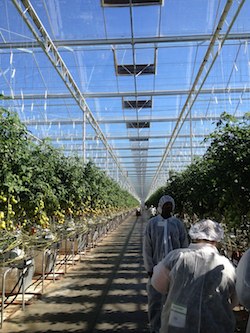 From new farmers, aquaponicists and sustainable agriculture entrepreneurs to urban farming pioneers, microloan providers and crowdfunding evangelists, yesterday’s 2nd Annual Seedstock Sustainable Agriculture Innovation conference at UCLA Anderson School of Management provided clear evidence pointing to the desire, will and motivation to develop economically viable and sustainable farming solutions to insure that the food system of the future not only survives, but thrives.

The two-day event, which drew an audience of nearly 250 from as far afield as New Zealand, Mexico and Korea, kicked off on November 5 with a sustainable farm field trip to Houweling’s Tomatoes in Camarillo where attendees were treated to an in-depth tour of the company’s sustainable 125-acre hydroponic greenhouse. Following the tour of Houweling’s, attendees headed over to McGrath Family Farms for a farm-to-table lunch provided by Chef/farmer Adam Navidi of Green2GO Restaurant Market. Following the lunch, farmer Phil McGrath gave the attendees a tour of his 5th generation organic farm and explained how he has used sustainable growing practices and direct marketing to remain economically viable. One of McGrath’s keys to farming successfully: “Grow a huge diversity of things and grow in season.” The day concluded with a farmers market menu designed by chef Josie Le Balch of Josie Restaurant in Santa Monica. The menu featured grass-fed lamb provided by sponsor Primal Pastures, a pastured livestock operation based in Temecula, CA.

Day two of the conference started off with a breakfast of organic pastries, fresh fruits and juices provided by sponsor, Whole Foods Market, Westwood Village.

The proceedings began with an introduction from Jason Reed, founder of Seedstock, that emphasized the need to look for sustainable farming solutions that not only improve the environment and benefit local communities, but that also result in economically viable business. Thaddeus Barsotti of Farm Fresh To You then delivered the conference’s keynote that touched upon the various layers of complexity in the food system and how he has managed to navigate this landscape and scale a CSA business rooted in sustainable and organic agriculture. “The most important sustainability issue on a farm: the bottom line,” said Barsotti. He also emphasized the growing significance and necessity of the internet and new technology in facilitating the growth of the local food system and enabling small farmers to achieve economic sustainability.

The day continued with a panel on growing new farmers. The panel, moderated by new farmer Paul Greive of Primal Pastures looked at the challenges of attracting new talent and the reasons why a new farmer should choose to embrace sustainable practices. “Why should farmers get into sustainable ag? Because it’s the only type of ag that will exist in the future,” said panelist John Mesko of the Sustainable Farming Association. Other participants on the panel included Colin and Karen Archipley of Archi’s Acres and VSAT, Barsotti of Farm Fresh To You and David Rosenstein of EVO Farm. 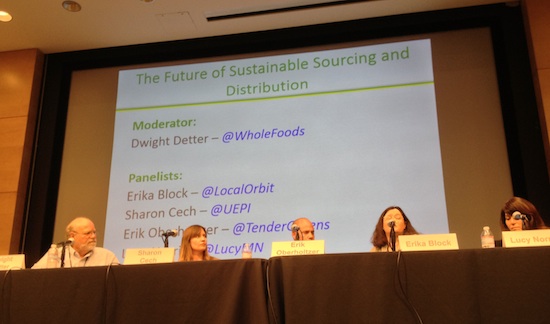 A panel on urban agriculture moderated by Dan Allen of Farmscape followed with panelists Rachel Surls of UC Cooperative Extension, Chris Higgins of Hort Americas, Rickey Smith of Urban Green LA and Tara Kolla of Silver Lake Farms delving into the fundamentals of why businesses and individuals should engage in urban agriculture. Kolla instructed prospective urban farmers to select a niche. “My whole business was about finding niche,” she said. “I specifically picked organic flowers because there weren’t any.” A farm-to-table lunch provided by sponsor Tender Greens followed.

After lunch, a panel on the future of sourcing and distributing sustainable agriculture with a focus on food hubs, what defines local food and food safety practices ensued. The panel, moderated by Dwight Detter, a Southern California forager for Whole Foods Market, featured Erik Oberholzer of Tender Greens, Lucy Norris of Northwest Agriculture Business Center, Sharon Cech of Urban and Environmental Policy Institute at Occidental College and Erika Block of Local Orbit. The discussion turned to food hubs and how more small-scale farmers are entering the supply chain. “Farmers are sharing resources and collaborating more than ever because it’s the only way to survive,” noted Norris.  On the challenges of sourcing from small farms, Oberholzer said: “The biggest challenge? Logistics. Some of the farms are too small to come to us. We have to go to them.”

Robert Puro, co-founder of Seedstock, then introduced the day’s second keynote, Laura Avery, manager of the Wednesday Santa Monica Farmers Market. Avery spoke about the future of farmers markets and how they must know their customers in order to be successful. Avery’s keynote was followed by a panel on sustainable agriculture innovation moderated by Jason Reed, founder of Seedstock that looked at a number of innovative sustainable ag startups and operations that have the potential to impact food consumption and production in the future. The panel was made up of Sanjay Rajpoot of Sustainable MicroFarms, a company that make products to make hydroponic farming more accessible and more economical; Brent Taylor of Beyond Meat, a company focused on replacing animal protein with plant protein where doing so creates nutritional value at lower cost; Adam Navidi of Future Foods Farms, which produces all organically grown products in 2,000-4,000 square-foot greenhouses and is one of the largest aquaponic farms in California; and Phil Cruver of Catalina Sea Ranch, the first offshore shellfish ranch in U.S. Federal waters.

The day concluded with a panel on funding the future of sustainable agriculture. Moderated by Nicola Kerslake of Battle Born Venture Fund, the panel focused on practical options, from crowdfunding and USDA microloans to venture capital, that farmers and sustainable agriculture entrepreneurs can pursue to obtain funding for their ventures. Panelist included Adam Chapnick of Indiegogo, Val Dolcini of USDA FSA and Zack Porter of Proteus Environmental Technologies. On keys to raising money via the Indiegogo crowdfunding platform, Chapnick remarked, “People do not fund projects. People fund people.” Dolcini encouraged the growers and entrepreneurs in the audience to get involved with advocating for the farm bill: “It’s a jobs bill. It’s a food bill. Engage in the process. Engage in the farmbill.” To future Southern California-based urban farmers he said, “I want to make microloans to urban agriculture in Southern California.”

Attendees then connected over beer provided by local brewer, Golden Road and hors d’oeuvres prepared by Urban Green LA with ingredients supplied by Farm Fresh To You.

If you weren’t able to make it, don’t fret; the entirety of the conference proceedings were recorded and will soon be available for your viewing pleasure.

See you at the next event!

Grow Riverside: Citrus and Beyond! – March 19 – 20 at the Riverside Convention Center in the City of Riverside, CA