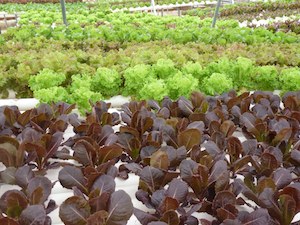 Bluebonnet Hydroponic Farms has been in business since 2000, when Emile Olivier and his wife moved to the U.S. from Canada. Emile wanted to capitalize on his family’s small-scale backyard gardening hobby, so the couple started the farm with cash infusions from previous endeavors and with a small inheritance.

Soon, the project became a family affair when Catherine Anderson, Emile’s daughter, and David Anderson, Catherine’s husband, began to work on the farm.

The family decided to utilize hydroponics as the technology would allow them to obtain higher yields on a smaller spatial footprint than conventional agriculture. David’s father-in-law also perceived that there was a demand and niche market for hydroponic produce.

“People were doing it on a hobby level,” David said. “No one was doing it at a large scale.”

The Oliviers and Andersons bought a 2.5-acre parcel outside San Antonio, TX and purchased used greenhouses. Anderson and his wife soon got to work dismantling and repairing the greenhouses.

The farm tested out various crops to see what could grow well on the property and eventually decided to grow lettuces, herbs and microgreens. Catherine began working for her parents full-time in 2005, and David came to the operation six months later.

“My job was to grow the business and develop it,” David said. “We started growing 25 different types of lettuces, 30 different microgreens, herbs, watercress, arugula, and basil.”

The Andersons now own 100 percent of the farm.

As the business started to take off, the farm began selling to various supermarkets such as HED, Whole Foods and Kroger’s. The farm also sells to local chefs.

The retail product is sold as live produce by the bag at grocery stores.

“We don’t process anything,” David said.

Since the farm’s inception, the Andersons have purchased additional land and now have 27 greenhouses. Currently, the couple is converting six greenhouses to grow more Bibb lettuce to sell to supermarkets.

“We had three greenhouses up and running with Bibb, but that wasn’t enough (to meet demand),” David said.

Bluebonnet uses technology to help monitor its gardening operation, feed the plants and monitor the greenhouse temperature. If something at the farm goes haywire overnight, the system will let the Andersons know.

On launching a hydroponic farm, David says, “If you want to do it on a commercial level you need to know it is a job, not a hobby. It’s not expensive to start and there are shortcuts to take. You can buy a brand-new greenhouse, or a used greenhouse. You can grow by hand, manually, or use electronics. There are different levels.”

David thinks that aspiring hydroponic farmers should do a lot of homework before starting a farming business, and believes that the hydroponic farming market is about to become more popular.

“Hydroponic, aquaponic and vertical indoor farms are positively changing the way local food is produced,” David says. “We are on the edge of something that’s going to explode.”

The farm does have room to expand. One avenue the farm may go down is to start raising farm-raised shrimp.

“I want to do it large-scale on a small space,” David said. “(I think) we would sell out every week.”

The Andersons are happy to be part of the local food movement in Texas.