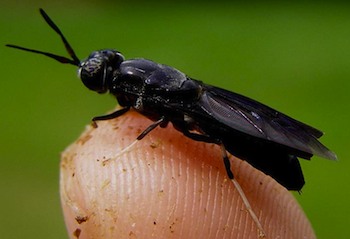 In 2007, Dan Merchant of Vancouver, British Columbia went fishing with David Suzuki, Canada’s most famous sustainability advocate, and had a life-changing conversation about fish food.

Aquaculture feed, to be more exact.

Commercial fish farming has long been criticized for its sustainability challenges; the fish feed produced from wild-caught fish, corn and soybeans is resource-intensive and competes for other uses, such as human consumption and biofuel. Grain-based animal feed faces the same sourcing and production challenges.

The conversation with Suzuki got Merchant thinking about methods of producing fish food more in harmony with nature’s design, noting that a staple food of many fishes is insects and their larvae.

Knowing that about 30% of food supply globally is shipped to landfills every year, and that 75% of that food is pre-consumer waste, Merchant started thinking about how to capture food waste to produce an insect-based animal feed and fertilizer.

So he devised a system in which the larvae of the soldier fly, Hermetia illucens, consume food waste, just as the species does in the natural environment. The larvae are harvested, cleaned, cooked, and dehydrated, and converted to animal feed ingredients and fertilizer. In this way, the larvae can convert fruits and vegetables into high-quality animal protein and oils that can be used to feed animals.

To achieve this feat, Merchant developed patent-pending technology utilizing bioconversion units that provide a fully controlled, artificial environment for the lifecycle of the soldier fly.

Based on this technology, Merchant founded Enterra in 2007.

Because Canadian and American regulations prohibit the use of post-consumer food waste as inputs to products that become part of the human food supply, Enterra restricts inputs to that food waste which has not yet been sold to the consumer; the unsold or spoiled produce at grocery stores and food distributors and food processing waste from food processors. Enterra does not accept household or institutional waste, yard waste, or manure. Such post-consumer food waste, Merchant points out, is better suited for waste-to-energy systems.

The firm generates revenue both from inputs and outputs. Charging waste producers  “tipping fees” competitive with traditional waste disposal fees generates revenue from Enterra’s raw input: pre-consumer food waste. Enterra then converts that food waste into protein and oils in the form of animal feed ingredients and natural fertilizers. The firm’s inputs and outputs are sourced, sold and consumed locally within the Vancouver area, and Enterra manages and recycles all packaging related to the pre-consumer food waste.

“It’s a technology has been in the academic literature for decades,” says Merchant.

Although several groups around the globe have dabbled with the technology, Merchant’s firm is the first to attempt it on a large scale.

The soldier fly was identified as an ideal species for the technology; because it does not feed as an adult, the larvae grow quite large to support the adult part of the insect’s life span, providing an excellent source of protein and oil for feeding fish, chicken, and other animals.

The product is sold to animal food producers and horticulture businesses. A whole grub product provides a supplement for birds, fish and reptiles. A protein meal product substitutes for fish, corn or soybean meal, and an oil product substitutes for fish, palm kernel or vegetable oil, both ingredients of animal feed. Enterra also produces a natural concentrated fertilizer from the larvae’s frass (digestate) that is used in organic propagation such as greenhouses and early-stage plant growth, providing a substitute for chemical fertilizers. The fertilizer has not yet been certified organic.

Enterra has not yet reached profitability in its demonstration phase. Merchant says the biggest challenge has been to secure $10 million in financing to build the first large-scale plant in Vancouver, which will enable the firm to reach a profitable scale. He has about half of the financing secure.

Merchant hopes to expand within the next five years, first with 1-2 demonstration plants within the United States. He hopes within ten years to expand into 25 U.S. cities identified as having food-waste organic distribution handling infrastructure that can support Enterra’s business model.

“The biology is straightforward and the business model is scalable,” says Merchant.