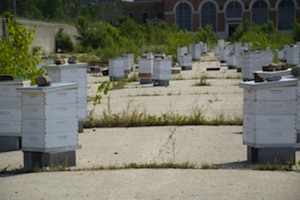 Summertime in the city means bees in North Lawndale, an underserved Chicago neighborhood that boasts an urban beekeeping co-operative.

The Chicago Honey Co-op was founded in 2004 by a trio of urban beekeepers who saw an opportunity to develop a green jobs training program for unemployed neighborhood residents.  That mission soon expanded into a wider community development effort focused on community gardening, healthy eating, and beekeeping education.

“The three founding members thought it would be a good idea to start a beekeeping co-op, so we registered as an agricultural co-operative with the State of Illinois and recruited members, found a place to locate an apiary and got started from there,” says Sydney Barton, one of the co-founders.

As a co-operative, Chicago Honey Co-op is a not-for-profit business. The members support the business by selling honey and honey products, including soaps, beeswax candles, lip balm, bath scrub, and honey mustard, at area markets, retail stores, via their website and on etsy.com. Beekeeping classes supplement the co-op’s income during the winter.

“The challenge for us is making it through another year every year,” says Barton. “Since we are a small apiary in beekeeping terms, we run out of honey early in the year and don’t have more to sell for 4 to 6 months when the bees will have more for us, usually late July. Classes help to pay the bills during that time but it is a tight squeeze every year.”

The bees are housed in three separate apiaries hosted by private businesses and a neighborhood organization; 24 hives are located at a produce business, 12 hives sit atop the green roof of a landscaping business, and 21 hives are located on abandoned railroad tracks. The three apiaries were split off from a single apiary in 2011, after the property they occupied was sold to a developer.  Barton counts the successful relocation and establishment of apiaries at the new locations as one of the co-ops greatest successes.

The co-op, which numbers about 35 members, is focused on engaging community members in developing the beekeeping operation as well as in creating a vibrant local food scene.  Co-op members can participate in the beekeeping operation or simply buy a hive and have other members care for it. Community members can also join a CSA for $60 per share. The co-op is a partner in preSERVE, a community garden in North Lawndale, along with Slow Food Chicago, the North Lawndale Greening Committee, and NeighborSpace, a nonprofit land trust devoted to helping community groups to preserve lands for community-managed urban agriculture and open space. The co-op also gives tours to school groups and the public, and offers presentations on beekeeping to community groups. Two annual fundraising events at the apiaries are open to the public at each year.

Chicago Honey Co-op’s honey is Certified Naturally Grown, which is a grassroots alternative to USDA Organic Certification. The certification relies on peer inspections and focuses on small-scale agricultural endeavors.

“We use no chemicals, antibiotics, fungicides or anything else in our beehives,” says Barton. The ban on chemicals is one of the co-ops only rules.

In 2012, the co-op successfully raised its own crop of queen bees.  Beekeepers in northern climates usually lose a portion of their hive each year and must purchase bees from areas in the south and west that have longer seasons. Raising queens allows the co-op to avoid the annual replacement cost and can potentially create a new source of revenue as excess queens can be sold to other beekeepers.

The rising public awareness over colony collapse disorder, exemplified by this August’s cover feature in Time Magazine, has led to a groundswell of interest in bees and beekeeping.  The Chicago Honey Co-op was featured in Meerkat Media Collective’s 2008 short documentary “Every Third Bite” about the role of bees as the glue holding together the industrial food system. The film advocates for small-scale agriculture supported by small-scale beekeeping operations as one way to help maintain healthy bee populations.

Raising bees in the city is also a way for people to get connected with the world around them, according to Barton.

“As a teaching tool, honeybees can help connect people to the food they eat and the environment around them,” he says.