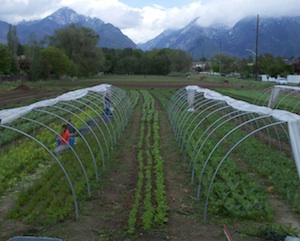 In 1997, David Bell ran a successful rock climbing business and his wife Jill spent her days waitressing in a local restaurant. They began growing their own vegetables in the backyard, producing far more tomatoes than needed. A local restaurant owner put them in touch with his chef who immediately purchased their excess veggies. Soon after, a local market owner who imported his tomatoes from a greenhouse in Holland wanted to make a purchase.

“The experience with the market coupled with a passion for gardening tipped us over the edge and we just said: ‘do you wanna start a farm?’ So, we took every penny we could get a hold of and in 1998 we bought a half acre of horse property and started growing heirloom tomatoes and it went on from there. Since then, we’ve grown 20 times in 15 years,” shares David Bell. A new organic farm was born and the local food movement in Salt Lake County received a much needed boost.

With established organic growing methods such as crop rotation, composting, cover crops and drip irrigation, the Bells manage to sustain ten acres of farm land. Using row covers and hoops, they manage to extend the short growing season of the west. In addition to the usual lack of pesticides and herbicides, the farm incorporates beneficial insect habitats to reduce pests and promote pollination.

These days, the Bells have moved away from the restaurant trade and found their niche in the world of community supported agriculture. This profitable endeavor supports 40 different types of vegetables for its customers. Two to 25 varieties of each crop ensures a single crop failure will not impact the commitment made to the 300 households who buy shares in the farm’s CSA. Offering local organic produce 26 weeks out of the year is a manageable CSA in the tempestuous climate of Utah. “The thing about a CSA is when people sign up you go into debt to them to perform. We know we can produce a good crop 26 weeks out of the year with a little help from some season extending techniques,” explains Bell.

Bell Organic has become something of a thought leader when it comes to connecting local farmers to local people. In the last couple of years they have been instrumental in the development of another statewide CSA operation called Farmer Next Door that provides Utah’s residents with year round access to locally produced food.

“There are a lot of farmers out there that are better than me but a lot of them don’t understand how to get their products to market. That’s where we come in with Farmer Next Door. We help people that want to eat locally year round connect with growers that just don’t have access to the market for a number of different reasons,” shares Bell.

Outreach and education is an integral part of the Bells’ approach to growing. A section of the Bell Organic website is devoted to an index of vegetables. This allows CSAs shareholders see what type of vegetables they will receive but also that a poly crop culture is possible in the Salt Lake region with a little hard work and a determination to make a difference.

A lack of infrastructure both social and physical affects the growers of the Salt Lake region. “We are in a rather urban area. In agricultural areas there is an infrastructure that we lack where I can’t look over my fence and see what my neighbors doing. I can’t borrow a plastic mulch layer from my neighbor because mine broke…those kind of things aren’t there,” explains Bell.

Infrastructure is only one of the issues faced by Utah’s smaller growers. Water and land are very much in shortage. “Here in the west where it’s pretty dry a lot of the unpressurized, untreated secondary irrigation water, well, they are closing canals left and right just because they are old and there are very few users for them anymore and they can’t afford to maintain them and so they just let them go,” states Bell. “The biggest challenge is competition for land. The land values here are through the roof. There’s a lot of pressure to develop. People have a lot of need for physical space, parks and IKEAs and parking lots and so on….”

Often the west finds itself slow to accept change with Big Ag in the form of vast cattle ranches and horse farms dominating the scene. But things are happening…slowly.

“Utah is 20 years behind the west coast. There is a lot of people getting behind local food here and really want to support it. We could use more support. We are a small family business without deep pockets and without a lot of options but there have been county, state and federal programs that have really made the difference. Growing 20 times in 15 years is kind of a big deal,” shares Bell. Without the kind of help that we’ve gotten from government agencies I don’t know that we could have continued to expand and continued to meet the demands of the market.”

Bell recognizes a very real need for more organic local producers in the arid western climate but thinks a little more education on a national level may be necessary for people to understand the importance of food security and local production. “The system that’s in place isn’t sustainable,” states Bell. “We do have to start coming to terms as a society with some of these practices that just don’t make sense. It doesn’t make sense to fly greenhouse tomatoes from Holland to Salt Lake City. There is a ton of room for the people who live here in Salt Lake County to grow a lot more of the food in spite of the fact that there is a shrinking base of agricultural land available. We can do a lot better to feed ourselves. There’s something to be said for food security too when you’ve got to import more food than you can produce it just makes us vulnerable. I think that most communities have the opportunity to do more with the space they still have,” concludes Bell.

A shortage of land for purchase means Bell Organic farm sits on leased land some of which belongs to the county. Next year the farm will expand once more. As one lease expires, three times the amount will become available allowing for more crop diversity and a larger customer base. “Every year I get a tiny bit better as a farmer,” laughs Bell. “It would be nice if I could get a whole lot better and fix some of the things that don’t seem to function but we get a little better every year, we grow a bit more and we continue to have the opportunity to have more hours of payroll available for local people who are looking to work in agriculture.” The farm currently employs ten locals and hopes to expand that number in the future. Encouraging the next generation of farmers is important to Bell.

“I think you have to be optimistic,” Bell advises. “You’ve got to be willing to take a risk and I think that for most people you just have to start by doing what you can. I think the old advice is the best: ‘do what you can, where you are with what you’ve have’; and there’s nothing wrong with starting small. Grow a small patch, see how that works and go from there.”

The Bells have no formal training in agriculture and Bell still does a little real estate business on the side to give the family a little extra security. It’s a learning process for the family, the farm and the surrounding community but the efforts of the Bell Organic Farm and the people behind it spell real change in one of the states that’s been a little slow off the draw when it comes to the American food evolution.