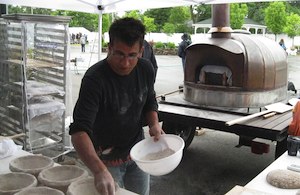 “We organized the first conference in 6 months around our dining room tables, and 75 people came,” said Amber Lambke, welcoming 250 people at the fairgrounds in Skowhegan, Maine for the 7th Kneading Conference. “We knew we needed to talk about rebuilding a regional grain economy.”

The “we” included masons, bakers, chef, and community members – people who realized that farmers, bakers, millers and oven makers have to talk about their overlapping interests.

Working within a commodity system segregates such would-be allies, but as this and other regions of small scale grain production have developed, more and more of these conversations are happening. Many of them begin in central Maine in the last week of July, and others start at the Kneading Conference West, in Washington’s Skagit Valley mid-September.

In Skowhegan, the talk has become action. Amber Lambke and baker Michael Scholz have opened a flour mill in the former county jail. This is tangible infrastructure, but the communication fostered by these conferences functions like an invisible spiderweb, developing relationships and networks required for localized grain production. Sure, people need land, seeds, combines, and bins. But without a miller, and a baker ready to use local flour, a farmer can’t pay bills.

The Kneading Conference West is in its 4th year, and was initiated by Steve Jones, director of the Mount Vernon research station at Washington State University. A speaker at the conference in Maine, he wanted to carry the energy and community building capacity home.

Both events include baking and wood fired oven workshops, plus panel discussions on the businesses of artisan baking, milling and farming. People come from across the country and around the world. You’ll find self-described breadheads who are a mix of professional and serious home bakers, plus farmers, food advocates, and others involved in helping advance the restoration of staple crops.

“I have a different relationship with my ingredients,” Baker Ciril Hitz told people recently in Maine. “It may not be a direct communication with the farmer or miller, but everything has changed.”

Hitz has led many workshops in Maine. His awareness of farmers and millers has grown as he’s listened to them discuss their work and concerns. Knowing what goes into getting flour into a bag makes him appreciate the process, and his place in the cycle.

This kind of understanding is very exciting, said Ellen Mallory, agronomist and sustainable agriculture specialist from the University Maine. Mallory researches small grains varieties and cultural practices in the course of her work, and as part of the Northern New England Bread Wheat Project. She sits on the board of the Maine Grain Alliance, the nonprofit that runs the conference. The organization serves regional grain production year round through education and outreach efforts using a mobile bread oven, and, now, baking classes. These classes will be held at the Somerset Grist Mill – the name for food-based community center that sits in the former jail.

Since September 2012, when the gristmill opened, 50 tons of flour, and 30 tons of oats have been milled from Maine grown grains. The products matter in and of themselves, but also because they represent to farmers that there is a market for new crops.

“Any new venture on the farm, you need to know that the market is going to be there,” said Mallory. “Takes a little bit of time to get that trust. You have to feel comfortable that the mill’s here for the long term.”

A significant client is Whole Foods, which contracted for 30 tons of organic flour starting in September of this year. The flour will go to the company’s central bakery in Massachusetts and the bread, with its Maine origins well labeled, will reach up to 70 bakeries in the North and Mid-Atlantic region.

Wheat for this project is being grown by Tate McPherson, a seed grower in Aroostook County. The farmer is also organizing resources for a grain depot in his area, a prime agricultural region also known as The County. He’s raised funds for storage and cleaning facilities that will help farmers grow and process grains.

This is not brand new for the state. In 1830, Somerset County grew 239,000 bushels of wheat. During the Civil War, Maine was a breadbasket for the Union Army. 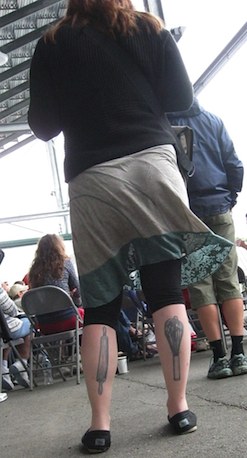 The legs say it all at the Kneading Conference in Maine. Photo Credit: Amy Halloran.

Similarly, small grain production is not a novelty in Western Washington. On Whidbey Island, record breaking amounts of wheat were grown in the early 1900s: 120 bushels an acre. (The average Kansas yield is now 45 bushels an acre, grown with heavy machinery and lots of inputs.)

Farmers in the Skagit Valley grow grains in rotation with their cash crops: tulips, potatoes, vegetables and vegetable seeds. However, what they grow is sold for little money on the commodity market. The Kneading Conference West is an extension of the year round work undertaken at WSU’s Mount Vernon station to help farmers.

Steve Jones wants to make grains work harder for farmers. He and his colleagues breed new wheats, developing performance in the field and in the kitchen, working with farmers, bakers, maltsters, and millers on flavors and functionality.

“We can import malt. We can import flour, but that means the value is generated somewhere else and then it (the product) came into our community,” Jones said in March at the meeting of the Northern Grain Growers Association in Vermont, where he was a keynote speaker. “Our vision in our foodshed is to keep the value right there – to not import organic feed from Nebraska for poultry folks.”

The Kneading Conference West will show how that vision is working, from field to loaf.