“There’s a lot of interest in urban agriculture right now, in coming outside and reconnecting with the earth and it just seems like there are a lot of people who are hungry for that.” – Emily Hanson, Stone’s Throw Urban Farm

Alex Leibman, Emily Hanson, Eric Larsen, Klaus Zimmerman-Mayo, Robin Major and John Seitz of Stone’s Throw Urban Farm are making a sustainable name for themselves by leasing empty lots throughout the inner city areas of Saint Paul and Minneapolis to grow food. The sustainable grown produce is in turn sold to the local community. It’s hard work for this six-farmer partnership, but so far the business model has borne fruit.

The founders of Stone’s Throw Urban Farm all have experience farming in the real world as well as education in sustainable agriculture. To launch Stone’s Throw they created a limited liability partnership comprised of numerous city lots that could produce a healthy sustainable diet for the local community.

In finding the lots to support their urban farming enterprise, the team sought to combat one of the main downfalls to starting an urban farm business: the high cost of land within the city limits. Hanson explains that rather than paying exorbitant rents for prime lots, the farmers drive around the city searching for empty space.

“Often times we see vacant lots in our neighborhood especially, and here in Ramsey County we have a tax look up system and you can look up a property’s tax information online and then find the owner. Often it has their contact information listed, or you can find it in the White Pages and that’s kind of how we come by a lot of lots,” shares Hanson. “You know, cold calling people and saying, ‘hey here’s where we are, here’s what we do, we’d love to use your lot.’ You basically offer maintenance of the lot. They don’t have to mow or take care of it during the growing season in exchange for use of the land.” 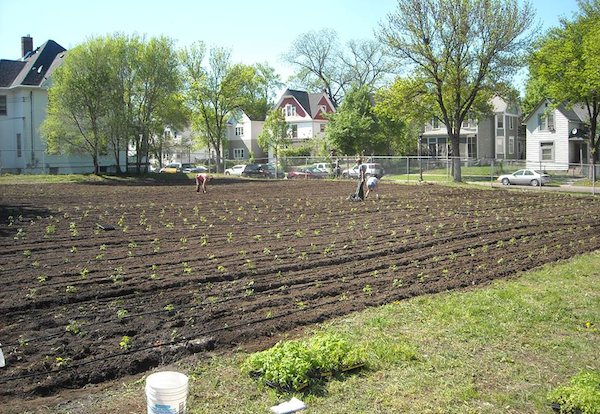 For some plots, the farm does pay a small rent, but none of the leases amount to more than a few hundred dollars a season. The largest lease payment is for Stone’s Throw’s seed farm. For the 2013 growing season, which lasts for eight months, Stone’s Throw will utilize 13 plots. Stone’s Throw tests each farm plot site for safe levels of trace minerals before planting begins.

For labor, Stone’s Throw relies on a bevy of volunteers, who spend their time in the plots, weeding, planting and placing tomato cages alongside the farmers. Hanson explains that 30 volunteers in one day aren’t unusual. “We have a lot of volunteer help. That’s a huge advantage for us being in the city. We’re so easy for people to come, stop by and help out,” explains Hanson. “We get emails every week people asking ‘please can I be on your volunteer list?’ You know we live in a big metropolitan area so there’s a lot of people that don’t get to see that every day,” states Hanson.

Stone’s Throw has achieved some success and according to Hanson, it’s all about diversity and hard work.  “I would say that the best source of profit in running a small urban farm like we do is diversity of market,” states Hanson. “We run a CSA and that’s really wonderful for us to get up front investment. We have a committed place that the majority of our produce is going every week that we know we have a market for. The farmer’s market that we sell at is also great. The Mill City market is one of the few markets in town where we feel that farmers are actually able to make a reasonable income. Restaurants are great because they’re flexible and they have chefs who are creative about how to use food. If we were to lose anyone of those pieces we would be very much less able to farm,” explains Hanson.

Hanson views Stone’s Throw’s mission as political as well as practical. “We’d like to see more farming everywhere, in the city and outside the city. We’re working towards making a model of our farm where we have a rural arm and an urban arm. Where we grow perishable produce right in the city and market it to people and do a lot of education. We really believe that agriculture is a tool for reconnecting with our neighbors, for teaching people about the ecological systems that affect our lives so much and being right in the city enables us to do that.”

“We want to see more small farms growing real food for people, more people back on the land means more ownership of the land and more control over what’s going on. The countryside has really been depopulated and the urban masses are more and more disconnected from where food comes from and we believe we have the power to take agriculture back into our own hands,” concludes Hanson.