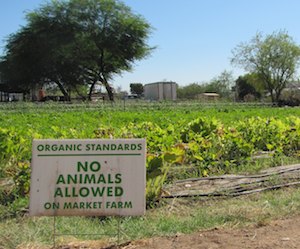 In 2006, Dailey started a full-time farm at her present location, leasing land tucked in the back corner of The Farm at South Mountain, a peaceful desert oasis featuring trees, grass, picnic tables, three restaurants, a home décor shop and a massage studio.

At first, she leased ¾ of an acre from The Farm at South Mountain’s owner, eventually expanding to cultivate an additional four-and-a-half acres down the street. She grows produce, herbs, flowers and keeps chicken for eggs. Crops cultivated include arugula, cucumber, eggplant, radishes, tomatoes, melons and dandelion greens.

The first year of farming brought Dailey resounding success. But the financial volatility that came over the next few years tested her commitment to her dream. Today, she is profitable, but the victory did not come without hardship.

“Small farms are fragile and they need community support,” said Dailey, who has worked hard to develop partnerships with local farmer’s markets, restaurants, schools and residents who purchase seasonal CSA shares. Dailey’s CSA membership has reached a high of 150, although numbers vary by season, and she aims to build a base of 200 members. No one sector stands out as the most profitable, she said.

The location, just an eight-minute drive from downtown Phoenix, affords Dailey prime visibility to carry out her mission of raising awareness regarding the importance of local food to Arizona’s security, in addition to residents’ physical and spiritual health.

Working with local establishments to increase the availability of local food is part of her mission. With a background in the restaurant industry, Dailey says she wasn’t shy about walking into restaurants and asking if they were interested in purchasing her vegetables and herbs. “The farm-to-table concept can be really beautiful,” she said.

Advocating for nutritious food in schools is another of Dailey’s passions. Although she has successfully sold food to at least one public school district and various charter schools, Dailey says the strict regulations schools face regarding food purchases hinders efforts to supply children with nutritious produce.

Dailey believes that easing the pathway from farm to cafeteria will benefit children by improving their health and mental faculties.

Even before achieving organic certification, Dailey adhered to Certified Naturally Grown practices. “That was the easier label to achieve first,” said Dailey, adding that certified organic is more respected and comes with higher standards.

Other sustainable practices include cover cropping to manage soil fertility, planting a diverse array of crops and solarization, which involves using the sun’s heat to kill pests in the soil. Plastic covering the soil helps to concentrate the sun’s rays and kill unwanted pests and insects.

Dailey’s goals include printing branded packaging that she has already designed and finding investors to fund expansion. “We’re at a place where our business model is in a presentable package,” she said. “It’s that time in our generation. We need to pop.”

Dailey wants very much to expand, and to enjoy the additional revenue that comes with increased production, but wants to make sure the infrastructure is in place to support that expansion.

“We’re in a holding tank,” said Dailey. “We’re trying to make sure we’re capable of making the next step.” Additional land would require added employees, a larger processing area and increased needs for transportation.

In the past, she has received grants from the Natural Resources Conservation Service, along with community block grants, for training and farm improvements. Loans, Dailey said, are difficult to acquire because she leases her land and lacks the assets to secure money.

A small-scale farmer’s life is tenuous, said Dailey. Eeking out a living on five acres, parcels barely big enough to rotate crops, makes earning a profit difficult. “I would not recommend this model for anybody,” said Dailey. “It’s the scale, it’s not big enough.”

Dailey perseveres because she’s passionate about local food, and what it means for the nation’s security and health. “The mission is important. Localized, small farms matter,” said Dailey.

And, she’s already pushed through the most difficult days.

“I’m at a point where we’re going to make it as a small farm,” said Dailey. “We’ve already paid our dues.”