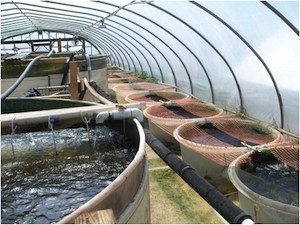 Cattle farming is just about as far apart from aquaponics as you can get, but for one family in Devine, TX, the switch from one to the other was the logical choice.

“We wanted to utilize our small acreage for something that my husband and I could both work on.  We wanted a business that we could capitalize on without having to go too far from our home, and we wanted to make it sustainable.”

Peggy and Richard Scott had been classic Texas cattle ranchers for over a decade, but more frequent droughts and a desire for change pushed them in a new direction.

While investigating a different business model, they prioritized sustainability because of their long years depending on the same plot of land. Using online sources like those from the University of the Virgin Islands, they discovered evolving strategies combining fish and vegetable production that required no dangerous chemicals and had a small footprint.

Taking a big risk, they decided to throw their full effort behind building a functioning aquaponic system and invested nearly $50,000 in initial infrastructure.

The greenhouses and the plumbing equipment were bought new, but everything else was purchased used. Many of the tanks came from other fish farms, and some were even bought from Texas oil companies (which required hefty cleaning to ready them for fish).

Installing the greenhouses in the rocky Texas hill country was no small feat. Where possible, they worked with the landscape as they put the farm in place. They use a gravity flow system to carry the effluent from the tilapia tanks to the vegetables. The only water pumps in use are to bring the water back up from the last greenhouse containing the vegetable rafts to the first greenhouse, which houses the tilapia.

After a year and a half, they have three greenhouses built for the fish, filtration, and vegetables. Six pumps run continuously and there are many layers of filtration.

“If you let any of the tiny tilapia in,” Peggy warns, “they will destroy the plants. For them, the roots look like a good meal.” 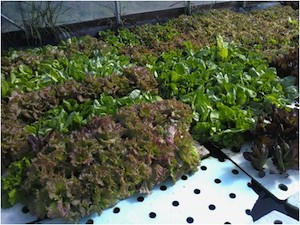 The roots they are protecting are primarily lettuce, watercress, and Swiss chard. They picked crops with roots that can be consistently submerged in water. Additionally, for most of the year the climate is too hot for many greens to grow well outside of greenhouses so they also have a competitive advantage.

They keep a close eye on the seasonal produce by selling exclusively at the Pearl Farmers Market in San Antonio. The market is San Antonio’s largest and fits their model well because it allows them to directly convey “the natural aspect of what an aquaponic system offers to the consumer.”

They monitor the market nearly as closely as their greenhouses, which require plenty of surveillance to determine when beneficial insects are needed to repel pests like flea beetles. “Pests can ruin an entire crop without a quick response, but beneficials are starting to stay permanently in corners of the greenhouse so they can come back season after season.”

While pests are a cost that can surprise them, the Scotts are more concerned with their guaranteed electricity bill, which is their largest expense. Early on, their bill was less than $200 a month, but now can get past $500.

To compensate, they have begun to keep their water warm during winter with heat from compost. They recirculate the water under the compost pile, heating the solution between eight and fifteen degrees before it reaches the fish. Using compost, they’ve saved more than $2000 on gas.

Scott Aquaponics’ compost water heating system is 30’x12’x6’ and can boost the water temperature up to 15°.

Eventually, the couple hopes to use the Texas sun and purchase solar panels, but they just haven’t found cheap enough systems yet.

Despite the challenges, they are thrilled that they made the switch. They argue that they are eating healthier, bringing a tastier product to the consumer, supplementing their income, and doing it without using any chemicals. The fertilizer for the vegetables is only from what the fish provide.

The system is tough to build, but simple and sustainable. Peggy states simply, “If it grows, it grows.  If it doesn’t, it doesn’t. We’re not going to add anything to the water that could harm the fish or the consumer.”