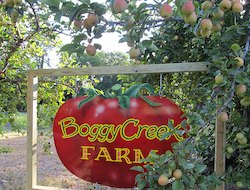 In 1992, 69-year old Carol Ann Sayle and her husband of 47 years, 65-year old Larry Butler, were fortunate enough, through owner financing, to buy five acres and a declining historic house in East Austin, TX, which, with a farm that they own in Gause farm, became Boggy Creek Farm, named after the creek/ditch across the street. Vegetables and fruit are grown on about 2.5 acres, with the remaining 2.5 acres being used for the shed/pole barn and parking space.

“Surrounded by housing subdivisions, schools, and commercial enterprises, which have been built on land once part of the farm, our Austin farm has become one of the few truly urban farms in the nation,” Carol Ann remarks.

Carol Ann and Larry also own a 45-acre farm in Milam County, Texas, outside of Gause 1.5 hours northeast of Austin, which they purchased, through the Department of Veterans Affairs (VA), in 1981.

Texas, along with other states, experienced an economic depression in the 1990s. So with their livelihoods dwindling and three children approaching adulthood, Carol Ann, who was involved in a full-time art profession and Larry, in real estate, decided to pursue organic farming full-time.

Boggy Creek Farm is a USDA Certified Organic farm and as such the couple’s main goal is to nourish the soil, which in turn nourishes the plants, which in turn nourishes us. Vegetables and fruit trees are watered through the drip tape process. Water is electronically pumped from a well, feeding the water lines to the vegetables, berries and fruit trees. Boggy Creek, across the street from the East Austin farm, was cemented up by the city of Austin and because the water goes past the farm, an old hand-dug well had to be revived. The farm makes its own compost by using chicken manure from chickens that have been fed soy-free and GMO-free organic products, as well as leaves brought in by neighbors. Additionally, weeds are used as cover crops. Weeds’ roots reach deeply into the soil, pulling up minerals and nutrients.

Raised planting beds are made using the tractor disc. The tractor slowly straddles the bed, and the disc throws the soil upward, making the bed. Afterward, the soil is fed minerals, molasses in granular form, and farm-made compost.

At various times during the growing cycle of most crops, especially prior to fruit setting, nitrogen-rich fertilizer such as feather meal, cottonseed meal, or commercial organic fertilizer is added. The fertilizers are scratched in around plants and watered in. Varying the fertilizers and using cover crops and compost provides a wide range of nutrients.

As far as bugs go, Boggy Creek Farm tries to concentrate on the soil by feeding it what it needs. Their philosophy is that if you make the plants happy by giving them good soil, generally speaking you won’t be ruined by bugs.

As with all farmers, weather can sometimes be a big problem. Carol Ann laments that because weather changes can be brutal and unpredictable, Texas can be a mean place to farm.

“Sometimes government regulations can also put a poker in the fire,” she says. “Presently, urban farmers in Austin are being examined by the city of Austin and there’s a possibility that stringent rules will cause downsizing or worse yet, the end of businesses.

“We would like to keep doing what we’ve done for 23 years by providing people with fresh organic food.”

Larry concurs that he and Carol Ann have always felt that the best thing they can do is to provide clean, organic, fresh produce to customers.

“I guess we’ll just keep doing what we’re doing, as long as we’re allowed,” he says. “It’s our passion and we would rather be farming than anything else.

“We just want to sell nutritious food that has life and energy at our farmers’ market-type stand, located about two miles from downtown Austin,” Carol Ann says.  “Cool weather crops such as carrots, lettuce, broccoli, etc. and hot weather crops such as tomatoes, squash, cucumbers, onions, etc., as well as figs, pears, berries, Satsuma Oranges and Meyer Lemons thrive under the Texas sun and our watchful eyes.”

The staff from approximately seven Austin area restaurants comes twice a week to Boggy Creek Farm to purchase fresh organic produce and fruit. Chef Eric Polzer of the high-end restaurant Wink is grateful that he is privy to such fare.

“I have been buying from Boggy Creek Farm since about 1997 when Wink opened and value Carol Anne’s and Larry’s help and expertise in understanding organic farming,” Eric relates. “Our restaurant was one of the first to be really aggressive in bringing local fare to our menu and since the menu changes daily, we really revolve around the farms.

“Carol Ann and Larry are real pioneers in this area and have a positive influence on other farmers and ranchers.”

“Sometimes you go through life thinking that you have the right profession and all of a sudden, something grabs you and you that is what you want to do. After farming about 23 years, we know that this is what we truly love.”

Carol Ann and Larry’s advice to aspiring farmers – acquire as much money as possible before you start your venture. If you don’t have money, work on a farm and learn as much as possible until you have enough collateral. And most importantly, find a place that has water.