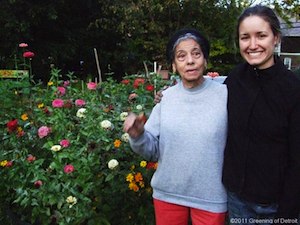 The organization’s vision is one of a Detroit where Detroiters grow the majority of fruits and vegetables they consume. The group also serves Hamtramck and Highland Parks, autonomous cities surrounded on all sides by the City of Detroit.

For post-industrial, rust belt cities like Detroit, where fortunes have long been so closely tied to the fate of a declining manufacturing industry, resiliency and self-determination are virtues grown from necessity. And, according to Keep Growing Detroit co-director Ashley Atkinson, self-determination starts with food.

“We want to get a lot more Detroiters growing food,” says Atkinson.

According to Atkinson, the Keep Growing Detroit’s Garden Resource Program has engaged with over 20,000 Detroiters working on over 1500 unique sites.  But that’s just about 3% of Detroit’s population of around 700,000.

“We’ve really engaged those who are drawn to this type of work,” says Atkinson. Now, she says, the goal becomes engaging those who are less self-motivated to grow their own food. Populations whose interests align with having access to healthy, local produce, such as athletes, those seeking weight loss, and those interested in culinary arts, are likely targets for the organization’s expansion plans, according to Atkinson.

Keep Growing Detroit grew out of The Greening of Detroit, a nonprofit devoted to increasing green infrastructure and forestry within the city. As Keep Growing Detroit’s activity increased and as its mission became increasingly focused on food sovereignty, the two organizations decided to amicably part ways. Currently, Keep Growing Detroit is registered as a non-profit with the State of Michigan and is seeking federal status. Until then, Eastern Market Corporation is acting as fiduciary.

The heart of Keep Growing Detroit is the Garden Resource Program. Under the program, families pay a $10 annual fee to receive 26 seed packets, 124 vegetable transplants, and discounts on educational programs. School gardens receive the same resources for $20 per year. Community and market gardens pay $20 per year to receive 78 seed packets and 364 transplants. The transplants are grown and distributed by volunteers at two locations in the city. Participants who volunteer a minimum of 2 hours of their time receive additional benefits such as compost, access to garden tools and soil testing.

Keep Growing Detroit also offers extensive educational programming, including weekly seminars and skill sharing sessions on topics related to sustainable agriculture, pest management, season extension, and post-harvest processing techniques like pickling and fermentation. Building local capacity and knowledge is a key goal of the program. According to Atkinson, local community leaders teach over half of these classes, and the group hopes to increase that number in the future.

The organization currently operates on donations, volunteer labor and small amounts of revenue generated through fees. Currently, three co-directors and five staff comprise the organization’s resources. According to Atkinson, the group is working hard to meet their basic needs and establish long-term financial stability.

Challenges to Keep Growing Detroit’s vision include moving beyond the initial swell of engaged and committed gardeners, to interface with a population with limited access to technology and funds.  To achieve the goal of food sovereignty, according to Atkinson, a significant increase in intensive small-scale farming operations will need to be cultivated. Detroit’s new urban agriculture zoning ordinance, may remove some of the perceived barriers, but starting a farm continues to be an intimidating prospect, Atkinson says.

“It’s a huge risk for people,” Atkinson says. “We need more people to take a leap of faith and get into the field.”