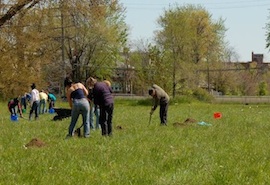 Urban farming has become increasingly popular in recent years as a way to deal with vacant property, revitalize neighborhoods and provide job skills and nutrition to remaining local residents struggling with poverty and a lack of access to fresh produce.

Detroit is no stranger to urban agriculture. The community garden movement in the United States was born in Detroit during the depression of the 1890’s, when Detroit mayor Hazen Pingree initiated a program to donate vacant land for gardens to supplement the diets and incomes of the unemployed. These gardens became known as “Pingree’s Potato Patches;” the program was subsequently copied by several other large cities.

Detroit’s Garden Resource Program, a collaboration between several nonprofits that offers guidance to local gardeners, estimates that there are currently 1400 community, school, and home gardens in Detroit. Many are communal gardens, but the number of non-profit and for-profit urban agriculture business ventures has been steadily increasing in the city.

Progress has been hampered, however, by lack of recognition of urban agriculture as a legitimate land use under city ordinance. Urban farms in the city operated under a veil of uncertainty, with no legal recognition of their right to exist.

To address this need, the City of Detroit Planning Commission initiated a discovery process in 2009, engaging local farmers and gardeners to develop language for an urban agriculture ordinance that would meet the needs of an urban environment while complying with state law.

“We looked at ordinances in other places, to see what made sense for Detroit,” Kami Pothukuchi, an urban planning professor at Detroit’s Wayne State University, told local NPR-affiliate WDET.

An agreement with the Michigan Agricultural Commission was reached, providing the city an exemption from the state statute. In March 2013, Detroit City Council finally adopted the city’s first urban agriculture zoning ordinance recognizing agriculture as a legitimate land use and setting standards for it. Because the ordinance rests on an administrative exemption by the state, courts can possibly test it in the future.

“I think the decision to enact ordinances and legalize farming in the city of Detroit will begin the process of removing barriers for young farmers to create long-term viable businesses,” says Alex Bryan, partner in Detroit’s Food Field farm and National Young Farmer Coalition board member.

“A successful business, especially in farming, has to involve planning. How can you plan if it’s not exactly legal to do what you want to do?”  he points out.

Production of oats, wheat and rye to maturity is prohibited to avoid rodent problems. The ordinance leaves several issues unaddressed and use of animals in agricultural operations is expressly prohibited. Beekeeping is also not protected under the ordinance.

“Gardeners who keep bees right now…. are not covered under this ordinance but the city is promising that is coming soon,” Pothukuchi told WDET.

“Many issues were not addressed in the ordinance, but [this is] a huge step in the right direction,” says Bryan.

“I think for the younger farmers it is encouraging to see a future that is validated and supported by the government,” he says.