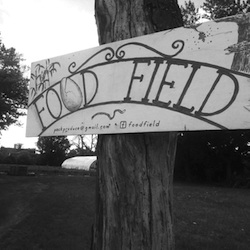 It is here that Noah Link and Alex Bryan, recent University of Michigan graduates, launched Food Field, an organic farm, in 2010. After working on several area farms and gardens, the pair was inspired to join Detroit’s burgeoning urban agriculture movement. Together, they drafted a business plan and applied to purchase land through the Michigan Land Bank Fast Track Authority, a state-operated clearinghouse for tax-reverted public property. The Authority approved the plan, and after soil tests found no contamination (a common issue in post-industrial urban landscapes), they purchased a 4-acre parcel that was the former site of an elementary school.

“It was a very easy process,” recalls Link.

Link serves as major partner and farm operator. Bryan, who lives in Lansing and works at the Greater Lansing Food Bank, works on weekends. Bryan also serves on the board of the National Young Farmers’ Coalition.

But perhaps none are as ambitious as Food Field. A truly post-industrial organic urban farm, Food Field was formed as a for-profit venture, unlike many communal gardens in Detroit. Link and Bryan are intent on demonstrating that small-scale, organic urban agriculture can be a legitimate, sustainable part of the local food economy, with the capacity to displace the industrial food system.

“We want to show that organic urban agriculture can create jobs and provide a substantial part of local food needs,” Link says.

A large variety of fruits and vegetables are raised at Food Field, as well as mushrooms, chickens, ducks, bees, and over 100 apple, pear, cherry and nut trees.  Produce shares are sold through a CSA, to local restaurants and at area Farmer’s Markets, including Detroit’s Eastern Market. 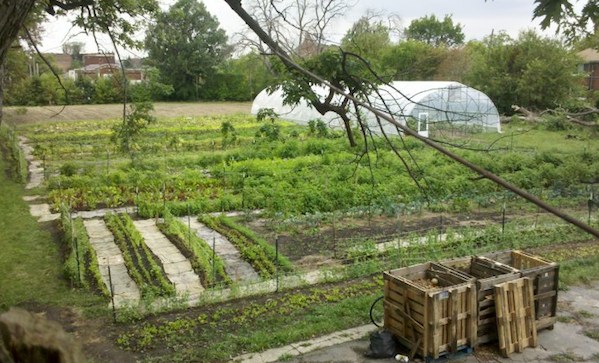 Food Field embraces a post-industrial ethic of restoration and sustainability, prioritizing healing of the land through permaculture practices such as intercropping and use of perennial crops and orchards. Food Field utilizes renewable solar power, partially funded by a grant from Good Magazine, and employs a used shipping container, nick-named “The Ark,” as a farmhouse. Food Field also implements hugulkulter, a permaculture method that entails building raised beds from buried, rotting wood. As the wood rots, it retains soil moisture, reduces irrigation requirements, and enriches soil over time while sequestering carbon.

Link and Bryan have no plans to pursue organic certification, primarily since they do not plan to sell in grocery stores. The farm had 17 members in its first season, and Link predicts 30-40 members this year. Members include neighborhood residents and people from other areas of the city, as well as from Redford, a nearby suburb.

Detroit’s first-ever aquaponic system will start up in the Food Field hoop-house this spring, thanks to a successful “Fishstarter” crowd-funding campaign on Indiegogo.com. Food Field merchandise, including stickers, postcards, t-shirts and recipes were offered as incentives. Premium gifts included invitation to a fish fry at the farm and an overnight stay in the Ark with a farm-fresh egg breakfast.

Unlike most aquaponic systems that raise tropical tilapia, Food Field will raise local bluegill and catfish. Both species are adapted to cold water, thereby eliminating the need to use energy for water heating. The fish tanks will moderate temperatures in the hoop-house, extending the growing season to allow the farm to grow produce during the cold Michigan winter, when local produce is non-existent. Link and Bryan designed and built the system themselves, modeling it after Growing Power’s system in Milwaukee.

Site preparation was a challenge, as it entailed removing rubble from the demolished elementary school. Beyond that, vandalism and crime has been surprisingly minimal, though a neighborhood animal did recently raid the chicken coop.

The farm is still working towards economic viability, and most revenue is being reinvested at this point, but Link thinks the venture will prove profitable in the near future.

“We are well set up to be profitable, once we line up our production goals with the right marketing,” he says.