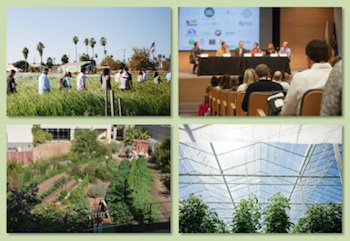 The Grow Local OC: Future of Urban Food Systems Conference presented by Seedstock in partnership with the OC Food Access Coalition, and scheduled for Nov. 10 – 11, 2016, at California State University, Fullerton, will explore the community and economic development potential of fostering local food systems in cities.

The Future Farm Field Trip on Day 2 (Nov. 11) of the conference offers an excursion into the diversity of urban and state-of-the-art hydroponic and aquaponic agriculture operations in Orange County. Tour participants will be treated to lectures and sessions from pioneering farmers who are embracing innovative business models and growing systems to both increase food security and take advantage of the escalating demand for local food. END_OF_DOCUMENT_TOKEN_TO_BE_REPLACED

Diversification, Organic Growing, and Savvy Enable Family to Save Farm and Prosper

The Grove, a diversified and certified-organic family farm in Riverside, CA used to grow only citrus fruit and avocados. But in order to survive a changing market, it has diversified to include a wide array of organic produce.

Hassan Ghamlouch and his wife, Deborah, have operated The Grove for more than 13 years. Their sons Zachary and Jacob are also key contributors to the operation.

The farm has been in the family for four generations, dating back to the late nineteenth century when it primarily produced navel oranges. When Deborah’s parents wanted to sell the farm in the early 2000s, she and Hassan decided to purchase it and take over. They based their decision partly on the fact that The Grove’s orange trees are part of the original rootstock planted well over 100 years ago.

But Hassan and Deborah knew that if they wanted to keep the farm in their family, drastic changes were inevitable and necessary. END_OF_DOCUMENT_TOKEN_TO_BE_REPLACED

Building local food systems is very complicated. There’s land use policy to consider, economic incentives and disincentives to comprehend, numerous complex pieces to connect within the supply chain. Additionally, you probably have neither the time nor the resources … END_OF_DOCUMENT_TOKEN_TO_BE_REPLACED