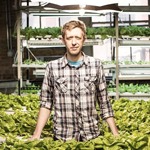 Todd Jones, who offers his opinion on the importance of record keeping on the farm, is the founding farmer and CEO of Every Last Morsel, a company that empowers entrepreneurs and innovators in local food.

Let’s talk about record keeping. That’s right, record keeping. It’s an aspect of farming that’s rarely ever talked about. It’s not sexy. It’s not fun. It usually ends up on the backburner of any farmer’s to-do list, and it’s understandable why.

Farming is hard work. There are never enough hours in the day to accomplish what needs to get done, and if you don’t put all your effort into growing food then you won’t have much of anything to record anyway. The problem is, when farmers don’t keep a record of their products they lose a valuable opportunity to learn. And because farming has such long business cycles, growers need to use every tool they have to streamline operations so their bottom line can flourish from year to year. END_OF_DOCUMENT_TOKEN_TO_BE_REPLACED