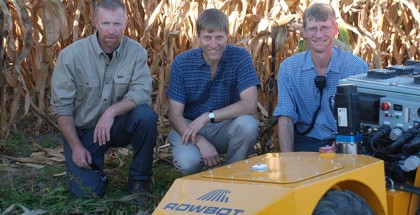 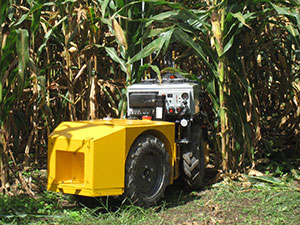 The enormous scale and consequence of this waste is what motivated a team of three very bright brothers with expertise in environmental science, dairy farming and robotics to devise a solution called “Rowbot.” END_OF_DOCUMENT_TOKEN_TO_BE_REPLACED

Nothing is impossible – so says a rock climber with his head pitched back staring up an ugly face of granite, a kayaker caught in a squall, a skier pointing tips down a sheet of black ice – or a man who has done all of this and then taken up farming Down East where topsoil is barely deeper than the pine pollen on windowsills in May. After chasing adventure in the guise of a Spanish literature scholar with a taste for Chilean deep powder, cliffs and white water, Eliot Coleman got himself some acreage.

Of course a lot happened in between, but the story of Four Season Farm and how it came to be began with Coleman turning his quest for adventure away from situational adrenaline surges to another sort of challenge: to extract sugar carrots from a fir wood rooted on ledge.

It was late 1960’s when Coleman came back down to earth. A decade earlier the back-to-the-land how-to book, ‘Living the Good Life’, by Helen and Scott Nearing had emerged and became something of a bible among the younger set. END_OF_DOCUMENT_TOKEN_TO_BE_REPLACED

“I fell into it. I didn’t think I was going to work for myself,” said Phillips who earned an environmental studies degree in college. Unbeknownst to him his career was set in motion the day he took a job at a greenhouse the summer after graduating. But he took to the work and in 1990 decided to go into business for himself. END_OF_DOCUMENT_TOKEN_TO_BE_REPLACED

Few look at a weed-choked city lot fowled by disemboweled cars and see a future of health enhancing vegetables by the bushel full. But this is what the founders of the Southside Community Land Trust (SCLT) saw 30 years ago in a down and out neighborhood in Providence, Rhode Island. That ¾ acre lot, now called City Farm, represented the start of something now a whole lot of lots bigger. In following its mission to provide access to land, education and other resources to enable people in Greater Providence to grow food in environmentally sustainable ways, SCLT has grown the number of community gardens it oversees to 16. END_OF_DOCUMENT_TOKEN_TO_BE_REPLACED

There’s a mystery to mushrooms that’s missing from say carrots or kale. Devoid of chlorophyll, they lack the color we associate with health and vigor. In that ‘destroying angel’ and ‘death cap’ are names meant to quell appetites, it’s logical that some would never sample even the tiniest taste of wild mushroom. That said, few tastes delight more than oyster mushrooms sauteed in butter and seasoned with a splash of sherry, or a warm broth made of fresh hen-of-the-woods. Leo Mondragon owner of Forest Harvest Farm, an organic wild mushroom farm in Petersham, Massachusetts, knows this well and has made it his business to share the pleasure.

What grows on Forest Harvest Farm is mushrooms, some where Mondragon scatters their spores, and some where he can only hope to find them. END_OF_DOCUMENT_TOKEN_TO_BE_REPLACED