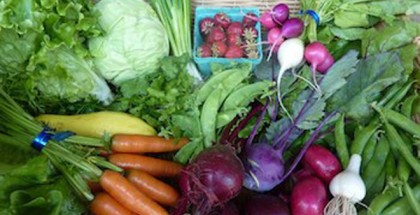 Organic CSA in Rochester, WA Finds Success in Sticking with What People Know

During this time of year, Rising River Farm’s namesake, the Chehalis River, flows fast and steady, and even though the rainy weather makes it seem that spring is months away, Jennifer Belknap is itching to get outside. Even after 15 years of co-running Rochester, WA-based Rising River Farm with her husband, Jim McGinn, she is still anxious to begin planting the seeds that usher in another season.

It’s quiet right now at the Greenhorn Ranch, but come Friday, after the first batch of chicks is delivered, Terry Gentry and Joan Hurst will be busy for the next eight months nurturing and processing chickens. As owners of G & H Pastured Poultry LLC, their mission is to raise healthy poultry.

When the women purchased 20 acres outside of McCleary, Wash., in 1997, their vision of the property didn’t include a poultry business. They thought of themselves as “gentleman ranchers,” Joan says, and the vision for the property evolved over time. END_OF_DOCUMENT_TOKEN_TO_BE_REPLACED

Soil is not just a growing medium; it is an ecosystem whose health affects the yield and taste of produce. “Synthetic fertilizer increases [crop] yield,” says J.D. Tovey, chief marketing officer of Carbon Cultures, “but it’s artificial. Biochar is about increasing the health of the soil.” And that is the mission of Carbon Cultures: to build healthy soils, healthy forests, and healthy people through the use of biochar.

Biochar is essentially a charcoal that is created by the burning of biomass at low temperatures, and its use as a soil amendment has a long history. Long-time farmers know what biochar is, Tovey says. “My grandfather would talk about it,” but people new to farming aren’t necessarily aware of biochar and its benefits. A famous example of a biochar-amended soil is the Terra Preta soil found in the Amazon Basin. This soil’s creation by humans occurred between 450 BC and AD 950, and centuries later, it is still a fertile soil, demonstrating that “biochar doesn’t lose its effectiveness,” Tovey says, and contributes to the long-term fertility of soil. END_OF_DOCUMENT_TOKEN_TO_BE_REPLACED

Vigilance Key to Reducing Damage from Invasive Species on the Farm

It is expected that crops and, in turn, revenue may be lost to pests, but through the use of integrated pest management and farmscaping, the crop damage caused by native pests can mitigated. However, when exotic, or invasive, species enter a farm’s ecosystem, traditional IPM practices designed to work with native prey and predators, may prove unsuccessful in stemming the damage these new intruders cause.

Invasive species are organisms – plants, insects, mollusks, or pathogens – that cause economic or environmental damage when introduced into a new landscape. The annual damage in the U.S. from invasive species is in the billions of dollar and their removal and or containment has been a major focus for federal and state agencies’ for years. END_OF_DOCUMENT_TOKEN_TO_BE_REPLACED

As an experienced bee keeper, Corky knew the benefits that honeybees provided: The majority of pollination in the United States is by honeybees, yet in Seattle, he “wasn’t seeing honey bees.” This absence is the reason he decided to get into urban pollination. Ballard Bee Company was the first urban bee pollination company in Seattle; “no one here was doing it” when I started, Corky says, and now four years later, there are other urban pollination companies. END_OF_DOCUMENT_TOKEN_TO_BE_REPLACED